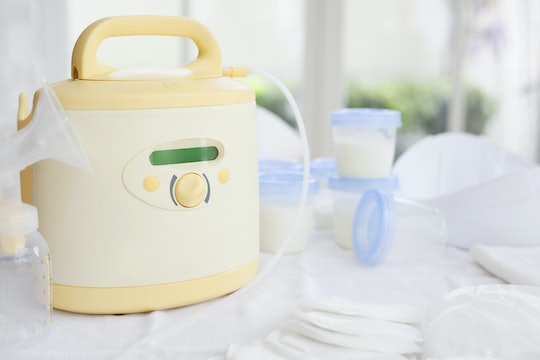 What To Do If You Have An Oversupply

When it comes to breast milk, it doesn't seem like there should ever be a problem with having too much of it. But the truth is, an oversupply can be painful for you and your baby, and make breastfeeding difficult. I know, it doesn't seem to make any sense, but it's true. Despite wanting to grow your freezer stash, you may find that your over-productive breasts are becoming a problem and need to know what to do if you have an oversupply.

Besides being painful for you, like dealing with engorgement or blocked ducts, an oversupply can make breastfeeding very difficult for your little one. KellyMom notes that one big problem of an oversupply is having a forceful let-down. Because your breast has so much milk, when your child goes to feed, they may choke or gag on the amount of milk being released, pull off your breast often while feeding, clamp down on your nipple to try and slow the let-down, and even become gassy and fussy. In some cases, it can even turn your baby off of breastfeeding and make it difficult to get them to latch.

According to La Leche League International, there are a few different reasons why you might be having an oversupply problem. For many women, oversupply just happens. For whatever reason, some women may simply have breasts that produce too much milk.

However, all of the other possible explanations for an oversupply could be the results of trying to follow certain breastfeeding "rules." La Leche League International notes that one big issue is when too many mothers time their babies on the breast, only allowing a child so long to feed before moving on to the other breast. When this happens, your baby never fully drains the milk, so when your child is hungry again shortly after, your body thinks the baby is ravenous, and produces even more milk to match your baby's demands. This tactic can also lead to your baby only drinking the foremilk of your breast milk and never reaching the fatty hind milk that comes in a few minutes later, making your baby feel constantly hungry, with a need to breastfeed more often.

La Leche League International also notes that unnecessary pumping, or pumping to try and slow your let-down so your baby can eat comfortably, can also exacerbate the problem.

Before fixing an oversupply problem however, take note that many moms find that their oversupply will subside to an extent around 12 weeks after delivery according to KellyMom. The website also mentions that you should avoid trying to reduce your supply between the first four to six weeks as this is when your body really ramps up its production naturally.

If you're ready to fix your oversupply, however, there are a couple of things to try. For starters, avoid any unnecessary pumping so that you aren't telling your body that it needs to make more milk. If your breasts are full and it's not time for your baby to eat, you can hand express some of your milk until you're comfortable, but don't attach yourself to a pump for a full session. This will only send a signal to your body that you need to produce more milk.

La Leche League International recommends feeding your baby on only one breast in a two hour span. For example, if your baby's ready to eat, let them nurse on only one side until they are full. If they are hungry again within two hours, offer them that same breast to adequately drain it. When those two hours are up, you can start offering the other breast in the same pattern. If the other unused breast becomes uncomfortable, hand express just enough to relieve the discomfort, but still keeping your breast full. This will signal to your body that it doesn't need to produce any more milk and will hopefully decrease your supply. La Leche League International suggests varying the length of time on the breast after a week if your baby still seems fussy with your oversupply.

Make sure, no matter what, that you don't deny your baby your breast if they want to nurse. You want your body to be in sync with your baby's demands and for your milk production to level out. By skipping feedings in an effort to reduce your supply, you're also putting your body at risk of blocked ducts and mastitis.