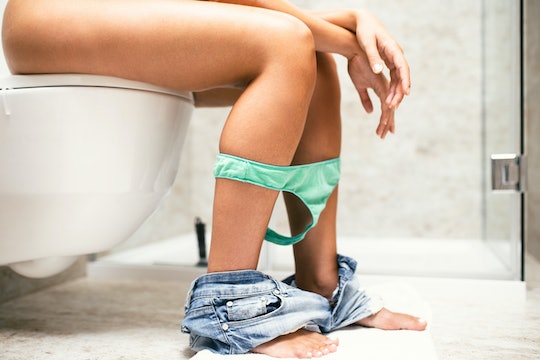 Here's What To Do If You Leave In A Tampon For Too Long, Cause It Happens

If your introduction to the world of feminine hygiene products was anything like mine, then you probably spent a good few years being vaguely terrified of tampons. As tweens, my friends and I were taught to regard tampons as ticking time bombs: For the first eight hours, tampons were your best friend; leave them in any longer than that, and they might literally murder you. It's not quite that black and white, I learned later, but there is some basis to the fear. So what are you supposed do if you leave a tampon in for too long? And how dangerous is it, really?

It all comes down to bacteria (as is so often the case). There's always bacteria in the vagina, as The Mayo Clinic explained on its website, but usually, "good" bacteria (lactobacilli) outnumber "bad" bacteria (anaerobes). If, however, there are too many anaerobic bacteria, they "upset the natural balance of microorganisms in your vagina." And guess what? "A blood-soaked tampon that lingers for a long time is like a petri dish for bacteria," as Katharine O'Connell White, M.D., MPH, director, Fellowship in Family Planning, department of OB/GYN at Boston University, Boston Medical Center, told Refinery29.

"All of a sudden, bacteria that wouldn't hurt you on most days has a thriving environment to grow," she said.

An overgrowth of bad bacteria can cause bacterial vaginosis, an extremely unpleasant condition with symptoms including gray, white or green discharge, a "fishy" odor, itching, and burning during urination. But if a type of bacteria called Staphylococcus grows, it can release toxins that cause the dreaded toxic shock syndrome, Dr. White said. "The risk of toxic shock syndrome is not high, but it is real," she said.

For that reason, always follow the instructions from tampon manufacturers (which usually state that you can leave it in for up to 8 hours, though Dr. White warned 8 hours is the absolute max and possibly even a little too long already). But let's say you sleep for a couple of hours longer than expected or forget to bring an extra tampon with you to work or just space out one day and leave it in for 9 or 10 hours? What are you supposed to do?

"Remove it," she said, adding that if you can't remove it, you should "go to your ob/gyn for "retained tampon removal."

Wondering what a retained tampon removal might entail? Don't freak out: "Lost" tampons are a common problem, and you probably won't need medical assistance in retrieving yours.

“Most of the time, a woman simply forgets the tampon is in there or she places a second one, forgetting about the first,” Jessica Kiley, M.D., associate professor and chief of obstetrics and gynecology at Northwestern University Feinberg School of Medicine, told Women's Health.

Plus, as Dr. Kiley explained, the vagina is only about three or four inches deep, and the opening of your cervix is far too small for a tampon pass through, so no tampon is ever truly lost.

Just make sure your hands are clean, then "insert one finger and gently sweep around to locate it. Grab and lightly pull." Dr. Kiley also recommends using lube for easier entry. After it's out, don't douche (does anybody anymore?); just rinse your vagina with a shower head and symptoms should resolve within a day or so. If symptoms don't resolve, however, or if you can't get that dang thing out, then a trip to the doctor might be in order... and maybe that aforementioned "retained tampon removal." As Health24 broke the procedure down, it's nothing too terrible (just one of those feet-in-stirrups/speculum/clamp affairs), possibly followed up with a round of antibiotics in the case of infection.

If you find yourself in that unenviable position, take comfort in knowing that you aren't the first woman whose tampon went M.I.A., and you won't be the last.