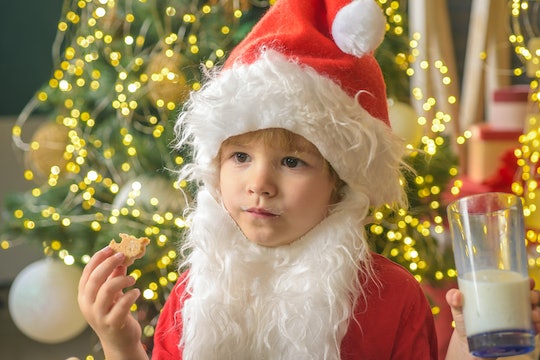 How Do You Deal When One Kid Believes In Santa & The Other Doesn't?

We have a bit of a situation at our house. As Christmas is next week, I'm getting increasingly nervous that my older daughter will tell my younger child that Santa isn't real. Our firstborn figured it out last year via lots of questions, a process of elimination and chatter from kids on the playground. As a 10-year-old, though, I suppose it was time. My 8-year-old is still happily oblivious, and I'd like her to have at least one more year of Christmas "magic." So what do you do when one kid believes in Santa and the other doesn't?

I don't know that my older child would tell her sister intentionally (unless they're fighting about something, in which case, all bets are off), but I do worry about a simple slip of the tongue that will bring the charade to a close. When it's time, it's time... but does it have to be time yet?

The whole debate over Santa Claus (whether or not to believe in him) is a hot topic among families. If you're one of the parents out there who chooses to tell your children the truth about Santa Claus, a stance defended by David Kyle Johnson, Ph.D. in Psychology Today, more power to you, I suppose. Celebrity parents Kristen Bell and Dax Shepard have been quoted as saying they told their children the truth about Santa because they didn't want to lie to them, according to Insider. While I'm firmly in the camp of "you do you," that philosophy gets a little tricky when it applies to your offspring. One confident kid boldly telling your Santa-loving child that the Big Guy isn't real could be awfully crushing. On the other hand, having to hold that in all season long might be stressful to a kid who just wants his buddy to know the truth about reindeer, chimneys and sleighs, as The Atlantic reported. While the truth vs. magic debate between parents rages on (and this is one seasonal topic I'm fairly confident isn't going anywhere anytime soon), every family has to decide on their own how they celebrate... and how they share the story of Santa Claus.

If you're deep into the myth of Santa but worried about your child's reaction when they do find out the truth, have no fear (this is advice for me as well). "Most kids do fine when they learn a myth is not real," Dr. Benjamin Siegel, Professor of Pediatrics and Psychiatry at the Boston University School of Medicine, tells PBS.

"Sometimes parents feel very badly because they want their kids to continue to believe in Santa Claus. Maybe parents like the myth because it makes them feel good, or because kids get disappointed in them when they find out the truth. Kids realize that parents aren’t so powerful, but that happens in adolescence anyway."

Well, I guess this is supposed to make me feel better? On the flip side, creating all that Christmas magic is a lot of work. Perhaps, once Santa Claus, Rudolf and the elves are just a really good story again, it'll be nice to have a break from sneaking around hiding gifts and setting out milk and cookies on Christmas Eve.

But back to the situation at hand. If your children are split on Santa Claus like mine, have a solo sit down with your older child ahead of time about keeping the St. Nick magic alive. Your kid is still a kid, after all. They'll get it. By bringing your older child into the fold, you're sharing something special with them. That in itself is a chance for bonding time together, which is its own kind of magic.

More Like This
From Captions To Gifts, These Are All The Kindergarten Graduation Ideas You Need
Fun Ways To Celebrate National School Nurse Day
34 Instagram Captions Perfect For Preschool Graduation Photos
12 Last-Minute Vacation Spots For Memorial Day