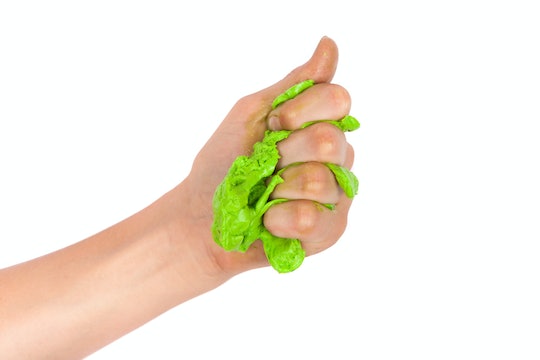 If Your Slime Is Too Tough, Here's How To Make It Buttery Soft

Let's be honest, slime is addicting no matter how old you are. I recently found myself shopping at a toy store with my kids, and I was the one who ended up with my fingers shoved in the "Try Me" slime jar. It's no wonder that families everywhere are experimenting with making their own stretchy goo. But what do you do when your slime is too tough? You need the answers because your kids will be looking to you to get their slime back on track, and fast.

One of the easiest ways to soften up tough or hard slime is to add about a spoonful of water and then to knead it into your slime until it returns to its regular stretchiness, according to WikiHow. You can also try adding a drop or two of hand sanitizer or even four or five squirts of lotion (and a splash of water), according to the same WikiHow page.

Whenever you have a slime problem on your hands, YouTube is also a treasure trove of information. In fact, YouTube slime star AndreaxAndrea's video on "How to fix any slime!" has racked up more than 1 million views. In the case of a tough slime, Andrea recommended that you steam it: "Take some water and microwave it until it's boiling. Put your slime in with it —very carefully — and close the door, and let it sit for 10 to 15 minutes." (Tune in to minute 3:30 of her video to get her specific instructions).

Another YouTuber, Jen in Wonderland, recommended that you fill a bowl of warm water and put your tough slime in it and gently working it until it starts getting softer. She refills the bowl with new warm water several times, and each time the slime gets stretchier and easier to work with.

Dealing with tough slime is never fun, but perhaps the biggest issue with slime right now is that some popular slime products, many of which are sold on Amazon, contain high levels of boron that can make kids sick, according to The Telegraph.

"Exposure to excessive levels of the element can cause irritation, diarrhea, vomiting and cramps in the short term, while exposure to very high levels of boron may also impair fertility and could cause harm to an unborn child in pregnant women," explained The Telegraph article.

No one wants something as silly and fun as slime to end up causing their children digestive distress. It's for this reason that many parents are deciding to make their own slime, and to make it without borax, which contains boron. Borax is typically added to slime to make it stretchy but there are plenty of alternative ingredients to get the job done.

If you're looking for a great borax-free slime recipe, I personally love the instructional video from What'sUpMoms on YouTube, which has garnered more than 4 million views.

With simple ingredients like baking soda, Elmer's glue, contact solution, food coloring and (optional) baby oil, you can see why this recipe is totally kid-friendly. You can add some glitter in too to really take your slime to the next level.