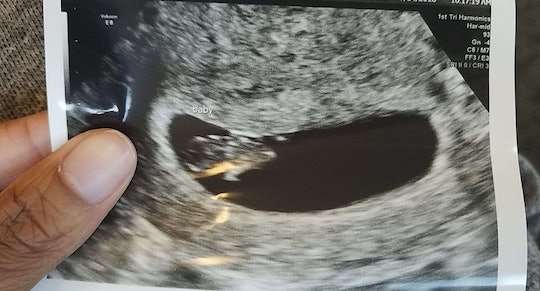 My Second Pregnancy Was So Badly Wanted, But It's Debilitating

Ambreia has a 2-year-old son and has been trying for a second child for a year and a half. This is the third installment of her Trying diary. You can read the previous entry here.

This month felt so surreal. I went through the highs and lows of knowing there was a new baby joining our family, and my brain is still swirling. I had about one week to be excited before the pain came in. If that sounds like a very short time, it is.

Seeing that positive test set me into shock. After so many months of negatives, I thought I was dreaming. Truthfully, I’d just gotten to the point where mentally I was ready to give up to protect myself. But I didn’t have time to process it because I had a trip to Washington, around the same time the pregnancy discomfort kicked in.

My life had finally started to look like what I’d imagined — there was freedom and travel. It's a cliché, but my pregnancy happened when I least expected it; when I had lost hope. With extreme fatigue and nausea, walking from one side of the room to the other became more than I could bear. So when I got back from my trip, I hardly moved. I started walking a tightrope of extreme nausea and food aversions. And it started to weigh heavily on my mental state.

Going through pregnancy the second time is nothing like the first. When I was pregnant with Chub, I didn’t have much going on and that made it really easy to move my life around and adjust to the physical and emotional changes of pregnancy. This time, I’m trying to build a career from the bottom up and have to deal with feeling sick along with an active 2-year-old.

I don’t think there’s a ton of time dedicated to what to expect when you’ve already expected before. And I wish there were more places dedicated to the difficulty of that new challenge. I was sick of receiving general encouragement in the form of “ don’t worry about it, it gets better.”

My body didn’t feel like my own anymore. So to prevent myself from feeling bad, I started sleeping for long periods of time. At my worst, I was averaging 12-18 hours of sleep a day. But life didn’t stop. My 2-year-old still had needs and it wasn’t long before it felt like he was suffering for my decisions. I don’t know what I would have done without my husband during that first month.

My favorite part of the day was going to sleep — it provided me with the chance to feel nothing. One Sunday while my husband was at work, I had a friend drive me to the emergency room. It felt like something had to be wrong. I’d been through pregnancy before but it felt nothing like this. The doctors found nothing other than a vaginal infection and sent us home with a couple prescriptions.

I was resentful and unable to eat most meals without feeling sick, so I just slept without eating. I’d drank so much ginger ale the smell made me want to vomit.

When I was awake, I was crying about the way I felt physically and emotionally. I was anticipating my husband's month-long trip and decided it was best to go to Texas to get help from my family. So at the expense of not seeing my husband for nearly two months, we got on the plane to go see my mom.

My relatives expected my usual bubbly temperament and were shocked about how tired I looked. Little did they know that as bad as I looked, I felt a million times worse.

They didn’t understand how debilitating this pregnancy was for me. There were so many days that I was incapable of getting out of bed. But the most frustrating part was going to the doctor and getting labs done and being told nothing is wrong. After my son was born, I experienced ongoing pain that later turned out to be a retained placenta — something the doctors didn't pick up until I had been complaining for weeks. It was an oversight that could have been life-threatening. So there's a reason to worry. I know pregnancy isn’t all sunshine and flowers, but I didn’t expect it to hurt like this.

The physical and emotional burden I’ve had over the last few weeks left me doubting everything about my life. My work productivity has suffered greatly and I felt like it’s making me a worse mom to my son.

But being around family, particularly my mom and close friends, helped me feel human again.

It’s hard being pregnant and raising a family away from your own family. Maybe they were what I was missing all along.