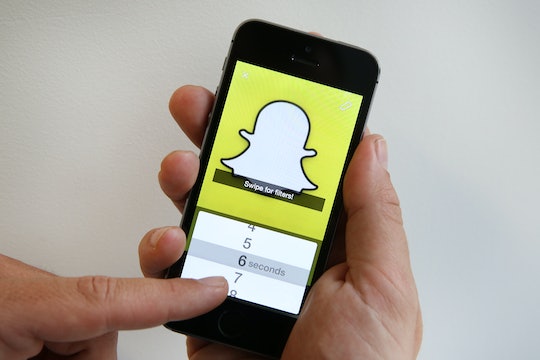 What To Know About Snapchat's Video Call Before You Make One

For those who don't already use Snapchat, the app's newest update might change at least a few minds. The latest features, added last week, are destined to make Snapchat's video call feature the go-to method for calling your friends. Or even just leaving hysterical video messages. While users have been able to video call using Snapchat since 2014, the latest update has a couple of bonus features. But first — here's what you need to know about Snapchat's video call feature before you make one.

To start, your friend doesn't have to be on the call for you to show them what you're up to. If they're in a meeting, they can gleefully watch you in real time (sort of like Periscope), or you can simply send the video as a message for them to watch as soon as they're released from that budget meeting.

If users can schedule a call, there's an added benefit of being able to write messages during the call, which is a feature I've always yearned for. Think being at a family reunion. You can answer the call and cheerfully show your buddy that you're BBQ-ing with the in-laws while sneakily typing that you also hope your SO's random cousin gets lost on the way to refill the cooler. Your in-laws think you love them, you get your point across without ignoring a call. That's some borderline-Jason Bourne stuff right there.

The calls will also allow users to flip the camera, so you can get a shot from your front and rear-facing camera with the touch of a button. That's just more fun all around. Of course, all of the videos, unless they've been saved, will disappear after they're read. Snapchat is still Snapchat, but just more fun now.

After almost a week of the new update, though, some users are finding it all too easy to accidentally call their contacts via video call. Video calls are great — just not if one is totally unprepared for them. Some users are already feeling that pain:

Still, some users just aren't ready for Snapchat to be about being calling people. Maybe one of the most important things to remember about the new Snapchat video call feature is whether or not you and your Snapchat crew are those kinds of people. If the new features makes it the "new" Skype, FaceTime, or even WhatsApp, then it's no longer Snapchat. For those who prefer texting, or texting images and GIFs to communicate with loved ones, adding a call feature and a video feature to boot might feel like an invasion of privacy.

So before you start getting all into the new video call features, think a bit. Consider your friends' preferences and whether or not they might just want a simple Snapchat story or even an old-fashioned text message. Then go ahead and video call everyone else to your heart's content.