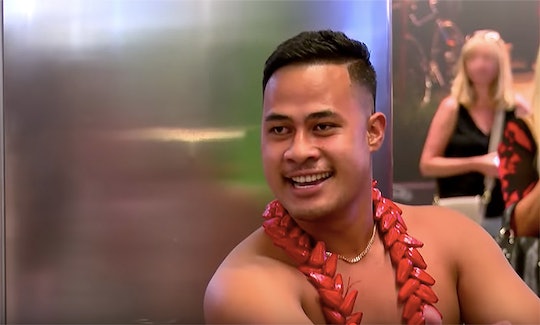 Everything You Need To Know About Asuelu's Airport Dance For Kalani

Many 90 Day Fiancé fans were shocked and confused when one of its stars — Asuelu — surprised his fiancé, Kalani, with a solo dance performance in the airport. Since it's not exactly typical for someone to throw a one person dance party in public, it's fair that some viewers want to know more about the dance Asuelu did for Kalani.

Out of all the cast members on 90 Day Fiancé, Asuelu and Kalani have the most unique love story. Case in point: Shortly after Kalani met Asuelu in his native home of Samoa while on vacation, they conceived their son, Oliver. Kalani was a virgin up until crossing paths with Asuelu, and her strict Mormon family wasn't too thrilled with the unexpected turn of events.

Of course, it's fair to assume Asuelu would be on his best behavior when arriving in Kalani's home of Southern California. Not only does Asuelu have an angry family to impress, but he has a relationship to keep on track. But in the wild world of 90 Day Fiancé, logic rarely prevails. And immediately after Asuelu landed in SoCal, he broke out into dance as Kalani — along with the rest of the airport — looked on in absolute disbelief.

It's important to note here that Asuelu's dance wasn't a little shimmy or a tap number — it involved rolling on the dirty airport floor and the removal of his shirt. Oy.

So, what was the dance Asuelu performed? Look no further than a number called "fa'ataupati," a popular dance in Samoa. In English, fa'ataupati commonly translates to the “Samoan Slap Dance,” according to Starcasm, and the dance is performed by groups of men.

It goes without saying that fa'ataupati is a beautiful and special dance that deserves respect. And given the rich history of fa'ataupati, it's reasonable to wonder why Asuelu decided to perform it solo — contrary to tradition — in the hellscape that is Los Angeles International Airport (LAX).

Kalani shares this sentiment, as she called out Asuelu on Instagram Sunday night. She wrote:

That face you make when you know damn well he never fa’aula you nor greeted you with a siva at Faleolo, but nowww he wants to give you the beautiful gift of the LAPD at LAX. #imfeelirritation #imfeellikebunchhim.

But as much as Kalani didn't like Asuelu's airport spectacle, it appears she got past that because the couple are still together.

"Our first kiss was weird AF, and I can’t wait to tease him with the story when our kids are grown! 😜🇼🇸💞#younglove#beautifulsamoa," Kalani captioned a Wednesday Instagram post about Asuelu.

Did you happen to catch the kids part? It's clear Kalani wants to have more babies with Asuelu, a sign that they're doing just fine.

As for Asuelu? The dad-of-one doesn't have time for the haters. "This message for all my @Haters 💀👺💩👻," he captioned a graphic about criticism. "God blessed your soul, your heart and your mind ❤️✊🇼🇸🙏🇺🇸."

Although Asuelu's decision to bust a move in LAX is confusing, the upside is viewers were introduced to fa'ataupati. All's well that ends well, right?