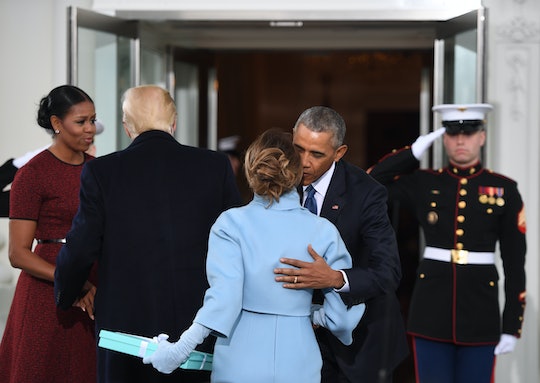 When the Obamas welcomed the Trumps to the White House Friday morning, incoming first lady Melania Trump gave first lady Michelle Obama a gift. The exchange of that iconic blue Tiffany & Co. box was surely awkward, since it broke protocol. But people are left wondering: what was the gift Melania gave Michelle?

As she greeted the Obamas with her husband, President-elect Trump, and approached the White House steps Friday morning, incoming first lady Melania Trump held in her hands a medium-sized rectangle Tiffany box, wrapped in a white ribbon. After exchanging air kisses and pleasantries with the outgoing first family, Melania, dressed in a powder-blue outfit designed by Ralph Lauren, handed the box over to Michelle, who seemed surprised and unsure of what to do with the gift. Once she accepted the gift, the outgoing first lady proceeded to look around for a nearby presidential aide to pass off the robin's egg blue Tiffany box. That's because, although Melania's present may be generous, it went against protocol.

According to the U.S. Department of State, the Gift Office within the Office of the Chief of Protocol accepts all diplomatic gifts meant for members of the state department and the White House, including the first family. Gifts are not directly given to the president, vice president, the secretary of state, and their respective spouses. Instead, those gifts are received and recorded by the Gifts Office.

Immediately following the awkward moment people took to Twitter with their hilarious guesses as to what was in the box:

Even the parody account for outgoing second lady Jill Biden got in on the fun:

While others thought it may be hold something high-end since it was from Tiffany & Co:

It seems, though, that Melania was merely following a tradition that first began with Michelle eight years ago. According to Racked, Michelle had handed outgoing first lady Laura Bush a present on Obama's first Inauguration Day in 2009. Still, if nothing else, the awkward moment shows that the gift was not at all expected.

There's still no word on what was actually in that iconic Tiffany & Co. box. In the meantime, the New York Post wrote that Nathan Strauss, a spokesperson for the high-end jewelry company, told CNN:

[The] White House has been a patron of the house of Tiffany & Co. since Abraham Lincoln.

I wonder if that means we can expect more robin's egg blue boxes over the next four years.