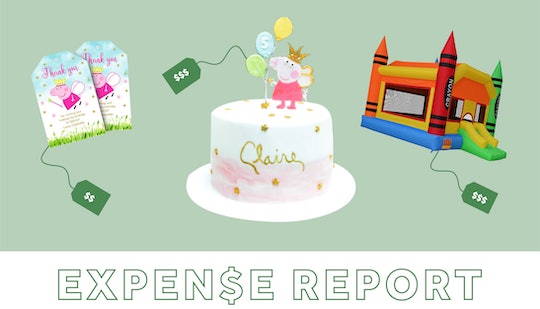 For some parents, over-the-top birthday parties are the ultimate way of trying to keep up with the proverbial Joneses. In fact, these soirees are now rivaling weddings in terms of time commitments and cost, and it seems like it’s not going to stop anytime soon. Case in point: a BabyCenter survey found that 26% of parents plan to shell out more than $500 for their kid’s birthday party. And for better or worse, I’m one of those parents. Here’s what we spent in pursuit of the perfect Peppa Pig party for our 5-year-old.

My little girl is a huge Peppa Pig fan. She speaks with that adopted British accent that so many kids her age are wont to do (even though we’re straight up from Queens, New York). She asks when we’re going to go on “holiday” again, and she always corrects me when I say Zoe “Zeebra” instead of “Zoe Zehbrah.”

So when it came time to plan her party, choosing a theme was a no-brainer. And apparently, I wasn’t alone in my desire to Peppa Pig-ify her shindig. Pinterest had a never-ending stream of ideas on how to properly celebrate the party of the precocious (and utterly precious) little piggie, and I was determined to match them.

As per the norm, my husband was initially 100% against the party. “No more parties!” he said, since we’re still recovering (mostly emotionally) from our daughter’s Sweet 16. And then I showed him a picture of an ombre Peppa Pig cake, and he was all in. “Maybe we should buy a water slide, too,” he suggested when we talked about what to do to keep the kids busy. A water slide for an October birthday in Connecticut didn’t seem to be too practical, so the slide was a no-go. Hubby was disappointed.

I love a pretty dessert table. And for me, the party planning always starts with choosing a cake. For my daughter’s party, I used the same cake designer I always do and I ordered Peppa Pig cookies from her, too. Usually for my younger kids’ parties, I’ll opt for a cartoon-like cake, but this time I wanted something prettier. (See ombre cake reference above.) The inside of the cake, though was pure chocolate for my little chocoholic daughter.

Five-year-olds have the attention span of a gnat. They do, I’m sorry. So I knew that we were going to need to have something awesome to keep them occupied during the 2-hour party. Cue the bounce house. Not only was it colorful, and cute, but it contained the kiddos and allowed the parents to have actual uninterrupted conversations. #Win.

And then, there was the ice cream truck. No, not a neighborhood Mr. Softee, but a legit ice cream bus. Ice Cream Emergency is a mobile ice cream parlor that kids and adults can go into and eat ice cream up to their eyeballs. The menu flavors ranged traditional vanilla and chocolate to peanut butter cup and (swoon) salted caramel. After the kids finished bouncing, they ran towards the ice cream truck with such force and fervor that I was worried that they might tip the bus right over.

After signing a big birthday card for my girl, the kids went inside and ordered their ice cream delights. Everyone loved the truck (parents included!) and felt like a kid in a candy store, er, ice cream parlor.

For this party, I flat-out refused to cook. Sure, I could have crafted an assortment of Peppa Pig apps on my own, but nope. The oven wasn’t going on that day. No ma’am. I wanted to enjoy the party, and being stuck in the kitchen wasn’t my idea of a good time. We opted for a pizzeria pizza and cake kind of kid party. And while we got child-friendly cheese pies, we also got fancier fare for the adults, like Buffalo Chicken, Chicken Parm, and Con Carne (an all-meat slice that had meatballs, pepperoni, and sausage).

In addition to the pizza pies, I made a small food table — and OK, the oven went on for like 15 minutes. I made Peppa Pig Curly Fries, and George’s Dinosaur Chicken Nuggets. Unfortunately, since the ice cream bus came first, everyone loaded up on treats and didn’t really want to eat the pizza. Hooray for leftovers, I say!

In all honesty, I forgot about the goodie bags until about one week before the party. So I scrambled to put something together that wouldn’t get me booed by the kids. I ordered Peppa Pig thank you tags on Etsy, bought some pink paper bags from a dollar store, and filled the bags with candy, and little mini figs from Target. I bought some polka dot ribbon from Michael’s to tie the tags to the bags and called it a day. I was tired.

For me, the dessert table is the centerpiece of the party. It’s probably what I spend the most time on, since it’s where we primarily take most of the family photos. For my girl’s Peppa Pig party, I purchased green tablecloths online, and outfitted the table with plates and platters that I found at Home Goods. I used glass vases and flowers from Michaels, and filled other glass jars with chocolate candies. We cut fencing that went in front of the table from white poster board.

To tie in the fencing theme, I bought mini fences from Michael's that I placed the Peppa Pig cookies in. Itty bitty thank you stickers from Etsy adorned the bottom of the Hershey Kisses. And my older daughter dipped apples that we had gotten while apple picking (yay, finally a use for them!) into chocolate and decorated them to match the theme of the table.

Any Peppa Pig fan worth their salt knows that if you’re going to jump in muddy puddles, you must wear your boots! We set out tables for the kids to sit at and eat their ice cream, and atop each table was a boot with flowers in it. Attached to the boot was a tag that read (what else) “Muddy Puddles.” The Croc boots were ones that my girl already owned, and we just got tags from Michaels and some chalk to decorate them with.

I thought it would be brilliant to try to make games inspired by the show. And I thought that the kids would note said brilliance and be impressed by my ability to translate the show into real-life games.

(Totally didn’t happen, by the way.)

So instead of traditional Musical Chairs, they played Musical Muddy Puddles. After the music stopped, each kid had to land on a “muddy puddle,” which was actually just some brown felt that I cut up into squiggly ovals. But the kids just ran around ignoring the puddles and danced like crazy.

I thought it would be equally amazing to have pigs on our property. Like actual pigs that the kids could pet and play with. (I live in the country where at any given time, we have deer, ducks, and wild turkeys walking around; having pigs would have just added to the animal menagerie that we call home.) Despite much searching, I couldn’t find a petting zoo that rented out pigs. Bummer.

So instead, we took pink balloons and drew little piggie faces on them. The goal of the game was for the kids to corral the pigs back into the pen, which was fencing that we got from Lowe’s. Well, as soon as the kids saw the balloons, they started playing with them and throwing them up in the air. And there went that game, too.

But hey, at least the kids had a great time. And now we have some new fencing to put in our backyard, so there’s that.

As much as I might strive to have a pretty Pinterest-worthy party, they never come out that way. Things can (and will) always go wrong. But I think that’s the real beauty of it all. There’s something wonderful about a perfectly imperfect gathering, and that’s what makes it most memorable—and beautiful.

So the games didn’t go off as planned. Sure, the ice cream bus almost took a tumble when two dozen 5-year-olds bum rushed it. And we got stuck with about 15 leftover pizza pies that are now frozen in our freezer. Someone twisted an ankle, a kid went missing for a few minutes (unbeknownst to anyone, she went to wait for her mom by their car in my driveway), and the stress of it all set off my sciatica.

None of that mattered when I asked my newly minted 5-year-old daughter if she had a good time at her birthday party, and she gave me that big smile that melts my heart, and said, “Yes, Mommy, a little bit.”

Prices for each item may vary.