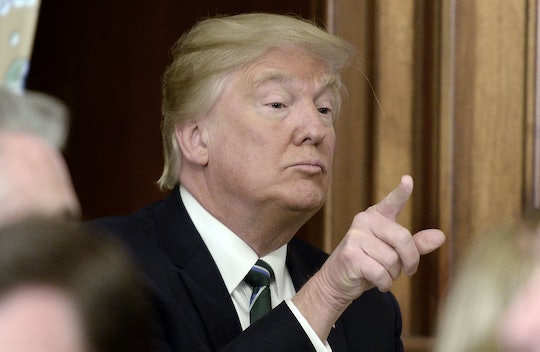 If anyone was still wondering how President Trump's administration felt about the arts, they need wonder no more. The White House announced a proposed budget on Thursday, and the news was grim for many domestic programs, including the arts. More specifically, following the 2018 funding announcement, parents were left to wonder what might happen to arts programs in schools under Trump's budget proposal.

"Can we really continue to ask a coal miner in West Virginia or a single mom in Detroit to pay for these programs? The answer was no," Mulvaney said. "We can ask them to pay for defense and we will, but we can't ask them to continue to pay for the Corporation for Public Broadcasting." (Mulvaney did not elaborate on his oddly insulting assumption that a coal miner and a single mother could not possibly want to invest in public broadcasting.)

Trump's budget plan proposes $2.6 billion in funding to Homeland Security in order to build that wall between Mexico and the United States we've all been hearing so much about; $54 billion to defense contractors and the military; and $314 million to hire more border security guards, according to The Huffington Post. Where will the money come from? Funding will, at least in part, stem from those other programs being slashed in the budget proposal, as well as from American taxpayers.

The National Endowment for the Arts program would be eliminated entirely under the new proposed budget from the White House, a total cut of $148 million per year. Those federal dollars are used to support and leverage art programs in education at local and state levels. If the proposed budget is approved, rural communities and small schools should expect to be the hardest hit, according to Kelly Barsdate, chief program and planning officer for the National Assembly of State Arts Agencies. Barsdate told The Washington Post that the NEA provides block grants to each state for arts programming; 25 percent of that money goes to rural communities, and 54 percent is focused primarily on lower income areas.

"We are gravely concerned about the impact on rural areas, low-income areas, school­children, seniors and veterans," Barsdate said.

Let it not be said that Trump isn't putting any money into schools, though; his proposed budget would funnel $1.4 billion to a voucher program for charter schools and private schools. Because of course it would.