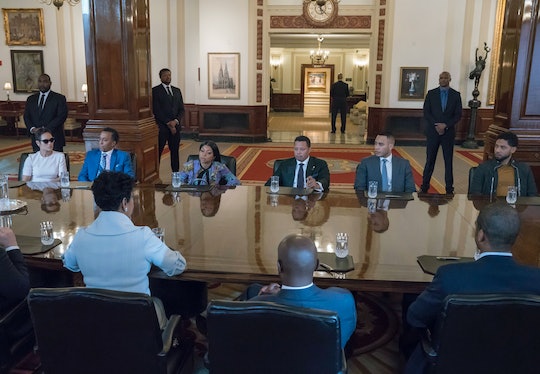 Bella's Kidnapper Is Revealed On 'Empire'

One of the Lyons' enemies really did a number on them last week. No, they didn't steal a track or release a scandalous photo. Rather, someone called Child Protective Services on the Empire dynasty and had them take away Bella, Hakeem and Anika's baby. At the end of Wednesday's episode, aptly named "Absent Child," viewers found out who did the deed — and a hint of their plan. As of now, though, the Lyons themselves are still in the dark. So what will happen to Bella on Empire? Her kidnapper was revealed.

Lucious and Cookie had an inkling as to whom could have done this: Angelo Dubois, Cookie's ex-fiancé. Not only did Cookie break up with him, but she inadvertently exposed his illegal practices. That means his political career is pretty much finished, so he has a reason to be angry. Angelo himself, though, swears he had nothing to do with Bella's shocking disappearance. From the contentious scene at the courtroom table with the Lyon family to being tortured by Cookie's friends, Angelo insisted that he had nothing to do with this. And, to his credit, he believed what he said... but his mother made a liar out of him.

At the end of the episode, the audience finally saw who was responsible for Bella's hijacking: Diana Dubois, Angelo's mother. As she nursed Angelo's torture wounds, she insisted that "extraordinary times call for extraordinary measures." That's when Bella was wheeled into the room and scooped into Diana's arms. Her plan? To make Bella a member of the Dubois family; Diana sees it as revenge for the Lyons ruining Angelo's life. Angelo himself seemed to have no idea, and was stunned his mother actually did this — and that she'd lied so seamlessly to the Lyons and their lawyer.

What's really going to happen to Bella? Will she actually join the Dubois and grow up hating the Lyons? It seems unlikely, especially because Diana and Angelo can't explain how they got a baby that just so happens to look identical to Bella. Diana may hold the baby ransom, or use her to blackmail the Lyon family. Thankfully, Cookie and Lucious were suspicious of the Dubois' from the beginning, so they may be able to save her soon. Now that Angelo knows, it's possible that he may go behind his mother's back to make things right. Ultimately, viewers want Bella safe and back with her family, so they'll have to keep watching to see how this unfolds.