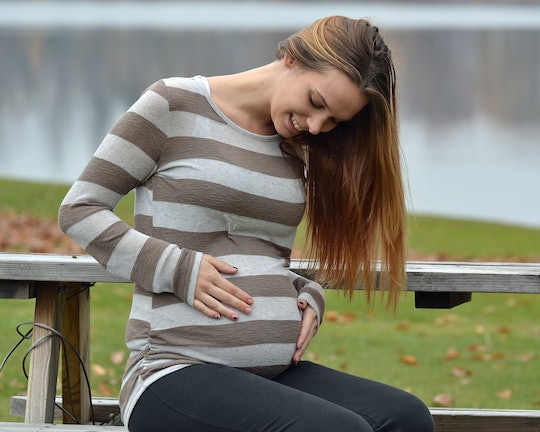 What Will Happen To Your Breasts During Pregnancy? 6 Ways Your Boobs Are About To Change

Everyone loves to talk about what you're going to do with your breasts after you deliver a baby, but your breasts change during pregnancy, too. You may have even noticed from the very beginning. Before I ever got pregnant, I was one of those women who could tell her period was coming just by the way my boobs felt. (They can also tell me when it's raining, just like in Mean Girls!) They would become achy and tender in the days leading up to my period, but that all changed when I became pregnant. Now they felt like bowling balls attached to my chest with nothing but dental floss. And as my pregnancy progressed, I began to leak colostrum, the precursor to breast milk. My boobs basically became alien-like to me.

According to Parents, all of the breast changes you might experience are totally normal, and are part of the process of your breasts getting ready to feed a baby. What to Expect notes the same facts, and attributes most of the changes and potential tenderness of your breasts to progesterone and estrogen. There's also a lot of fat building up in your boobs, along with increased blood flow as your breasts get ready to nourish a baby.

Even if you decide not to breastfeed, you're most likely going to feel some of these six changes to your boobs over the next nine months. A baby really does change everything, right?