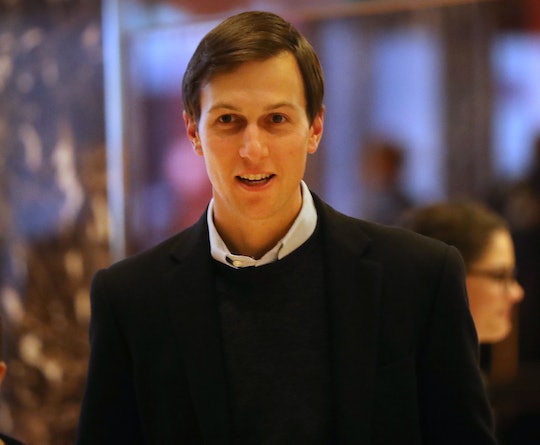 The Trump transition team announced on Monday that Ivanka Trump will not be taking on a formal role in her father's administration. But President-elect Donald Trump is still keeping his family close. His son-in-law, Jared Kushner, will still have a White House role. A very important one, too — Kushner was named a senior adviser to the president-elect, which means that he will have a security clearance and be around for all of the important day-to-day business of the presidency. So that's why Ivanka bought a house next to the Obama family in D.C. It's all coming together now.

Kushner, a 35-year-old businessman, real estate developer, and publisher of The New York Observer, was a key adviser during Trump's campaign, so it sort of makes sense that the president-elect would want to bring him along. Other campaign advisers, like Steve Bannon and Kellyanne Conway, were also given White House adviser roles.

But Kushner is not Steve Bannon. That should be a good thing for some people, but in this case, Kushner's appointment is much more complicated than any offer Trump's made to anyone so far. Since Kushner is related to Trump, it's possible that his appointment violates anti-nepotism laws, according to NPR.

Those laws were passed in 1967 by a Congress, under the guidance of President Lyndon B. Johnson, after fears in 1960 (things can move slow in the capitol) that President John F. Kennedy would appoint his brother Robert to be the attorney general.

So far, those laws haven't been tested to see if they apply to non-Cabinet positions. The Trump team maintains there is no issue, but Democrats are likely to raise the issue post-inauguration, as they plan on doing for all of Trump's appointments.

It's understandable to not want the president to have his family take over the White House — you don't want an adviser or subordinate to not be able to do their job properly because of family baggage or a fear of contradicting the boss. There's just too much on the line to not give advisor (or any) roles to those with the most experience. Trump apparently believes Kushner is up to the challenge.

Kushner has some other issues, too, like a billion dollar business deal pending in China that could potentially be an issue. Romper's request for comment from the Trump transition team about these conflicts of interest was not immediately returned.

His legal representation said in a statement to NBC News, "Mr. Kushner is committed to complying with federal ethics laws and we have been consulting with the Office of Government Ethics regarding the steps he would take."

Kushner resigned from Kushner Companies, where he served as CEO, and will divest himself of "substantial assets," in order to take on the job. Likewise, his wife Ivanka will also resign from her roles in the fashion business and the Trump Organization, as well as divest herself from financial assets to avoid a conflict of interest.

Kushner has no formal government experience; He was born into wealth and took on his family's business at a young age. During the campaign, political insiders dubbed him "Trump's mini-me," so the two obviously have a close bond. For some, that bond might just be a little too close for comfort.

Trump's own conflict of interests have also been called out since his election, and although his transition team says they are being advised on how to properly untangle the president-elect's business deals with his upcoming political ones, Trump maintains that criminal conflict of interest laws don't apply to the president. However, with his son-in-law now on board at the White House, it's likely things will continue to complicate themselves further.