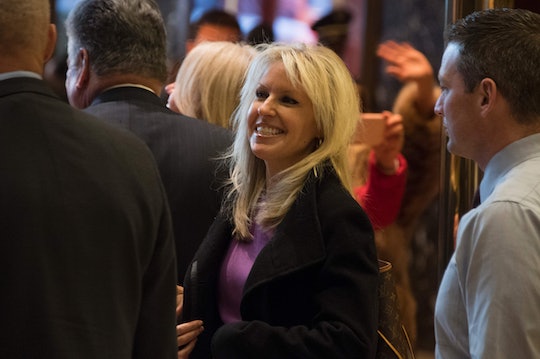 Hey, everyone: There's finally some sensible news coming out of the Trump transition. On Monday, Fox News commentator Monica Crowley declined a White House job amid a boiling plagiarism controversy, so there's one more point in the "ethics" column for the incoming administration. But what will Monica Crowley do now that she's turned away from Team Trump? Her reputation is seriously on the line.

In a statement this week, Crowley explained, “After much reflection, I have decided to remain in New York to pursue other opportunities and will not be taking a position in the incoming administration." What those other opportunities might be are anyone's guess. The move comes after reports from CNN that Crowley allegedly plagiarized passages of her 2012 book What the (Bleep) Just Happened? from Wikipedia and news articles.

The passages were similar-seeming enough that the publisher, Harper Collins, pulled the book from shelves. To make things worse for the conservative author, Politico dug up an old P.h.D. dissertation that also appeared to be plagiarized, as well as some of her Washington Times columns. So she might not be writing a book or a column anytime soon — though she's been a regular on Fox News in the past and now that they've lost other female anchors like Greta van Sustern and Megyn Kelly, maybe she can secure her job there.

Crowley was initially offered a sweet communications gig for the National Security Council, but the plagiarism allegations — which the president-elect's team deemed politically motivated — seem to have really gotten in the way. No matter what the Trump camp thinks of the allegations, one thing is obviously clear: they don't need any lingering scandals once Trump enters the office (they'll probably have more than enough to deal with as it is).

Already, Trump's Cabinet pick hearings and Trump's own possible conflicts of interest when it comes to his businesses are a lot to handle. And they already have one alleged plagiarizer in the inner circle — there's no room for more.

She might not have been the greatest fit for a high ranking post in the administration, but plagiarism charges don't necessarily mean that Crowley will be out of a great job. Although plagiarism used to be a career killer, in the recent past, many well-known names in media have been accused of lifting other peoples' work and somehow, even in the age of the internet and Twitter gossip and hot takes, still manage to keep some of their credibility. Most recently, Jonah Lehrer, a well-known science journalist, was found to have plagiarized some of New Yorker blog posts and exaggerated quotes from Bob Dylan in his book Imagine. But this summer? He got another book deal.

Apparently, remorse and enough connections in your industry are enough to get a pass on plagiarism (just don't tell that to the teen pulling an all-nighter working on an English paper, please). So Crowley saved Trump from a little more scrutiny than he was already getting about asking her to take the job. But Crowley will most definitely land on her feet. That's how business works.