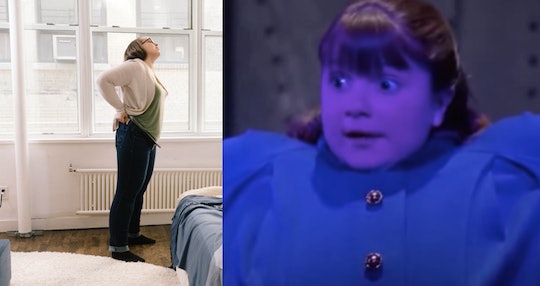 Finally seeing two pink lines on my pregnancy test after trying for such a long time to conceive, I felt like I was ready for anything pregnancy would throw my way because I was just so thankful to be pregnant. I was even looking forward to a bump, because to me, that meant it was really happening. What I wasn’t prepared for was how quickly I’d obtain said bump. “There’s no way I’m showing already at 9 weeks,” I thought, since the baby was the size of a cherry. Which brings me to what you need to know about pregnancy bloating, because I’m sorry to say I was right, and that was definitely not the baby. It was gas.

For some women, not only does it look like you just ate a very large burrito from Chipotle for most of the beginning of your pregnancy — instead of a bonafide baby bump — but you’re pretty uncomfortable to boot. I felt awkward and uncomfortable in my jeans and I felt like it was way too early to purchase maternity pants and shirts. However, this didn’t stop me from buying some maternity leggings, because so worth it. These leggings also allowed me to have the best Thanksgiving ever, and I was very thankful for elastic this year.

I always felt constipated, and even when I went to pee, I’d have sharp gas pains in my crotch area, which freaked me out, in addition to being severely uncomfortable. It also felt like what I had imagined labor may feel like (on a smaller scale) whenever I'd have a BM. I even felt horribly full after eating only a small amount of food, and I felt like I could explode at any moment. I didn’t want my husband to touch me, just in case I exploded, and I certainly wasn’t in the mood for sexy time while I felt like Violet Beauregarde from Willy Wonka and the Chocolate Factory. (After the blueberry incident of course.) I was ready for the Oompa Loompas to come out of my closet and roll me to the juicer at any moment.

At the time, since it most certainly wasn’t the baby yet, I reached out to Dr. Yvonne Bohn, an OB-GYN at Providence Saint John’s Health Center in Santa Monica, California, to see why I already had a bump when my baby was so tiny. She tells Romper that I could thank the hormones estrogen and progesterone for making me balloon up and look 16 weeks pregnant. According to Bohn, estrogen and progesterone rise during pregnancy to help create a healthy environment for your growing baby. These hormones cause a delay in the time it takes for you to digest foods in both your stomachs and intestines. “Because of this delay, water is reabsorbed from our stool, which causes constipation and the backup of stool and gas in our intestine, which leads to bloating and gas," she explains.

Unless it’s your second pregnancy, most women don’t tend to have baby bumps at all until between 12 and 16 weeks, according to Baby Center UK. Bohn agrees, noting that your uterus is still below your pubic bone until 12 weeks, so the pooch isn’t the baby or your uterus — it's just gas.

I need some relief that doesn't include popping Gas-X every single day, and Bohn suggests drinking more water, exercising more, and increasing my fiber intake. “All of these things increase the movement of the intestines and prevent back up,” she says.

Finally, once I hit my second trimester (and upped my exercise game and veggie and water intake), I felt back to normal — well, as normal as one can feel when they're pregnant for the first time. The bloat bump disappeared and slowly turned into my actual baby bump, which I’m super excited about and proud of now. No longer do I feel like people are looking at me and wondering if I just love drinking beer, ate a huge burrito, or if I’m pregnant, because I definitely look pregnant. If you’re just starting out with this whole pregnancy thing, don’t worry about the bloat, it will go away faster than you think. Then you can look forward to feeling those first flutters that are finally your baby and not gas pains.