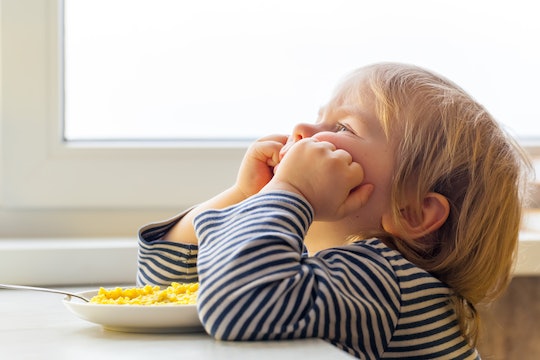 Meal time can be a very stressful production in some households — especially when you have a toddler. One minute they love chicken nuggets, and the next minute they’re repulsed by them. What gives? Are they just not hungry, or does your toddler relish in making your life a living hell when it’s time to eat? Try not to panic too much — what your pediatrician wants you to know about your toddler refusing to eat might be just the peace of mind you need.

Pediatrician Jarret Patton says that picky eating in toddlers is one of the most common complaints he receives from parents in this age group. And when you think they feel like this is a fun game for them, you’re not too far off. “Toddlers have a new found independence that makes them want to defy you,” Patton tells Romper in an email interview. (You know, in case you hadn't noticed.)

But their refusal could also be from outside factors and not because they’re being a total jerk. “One of the most common ways toddlers refuse to eat is by drinking. If they constantly have access to a sippy cup with milk or juice, this can trick their brain into thinking they are not hungry,” Patton says. To remedy this, Patton says to substitute water for juice or milk during the day, so they’ll feel hunger and eat what you put in front of them — even if they claim to not like it as much.

So if they’re just being difficult, how can you remedy that? Head over to Pinterest. “There are lots of fun food ideas on the internet that can turn healthy fruits and vegetables into fun shapes that facilitate eating. Although picky eating with your toddler can be stressful, don't let it stress you out. Take control,” he says.

And don’t worry too much. According to Patton, “Toddlers don't eat large quantities of anything — remember a serving size is the size of the palm of their hand. However, in general, toddlers get enough nutrition, and visits with their doctor will verify growth. If there is a concern, a specific action plan will be developed.”

So try substituting that juice or milk with water, and if you have time, hit up Pinterest and find some creative ways to make mealtime fun for your kid. Because let’s be honest, wouldn’t you prefer to watch them turn down chicken fingers in the shape of dinosaurs? You know you're going to eat them later anyway — they might as well be fun to look at.