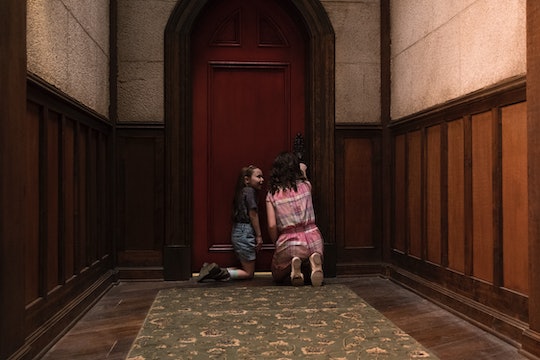 Netflix’s latest horror installment, The Haunting of Hill House — which was inspired by Shirley Jackson’s novel of the same name — follows the Crain family’s dark relationship with the haunted summer home they lived in as children. One of the show’s biggest mysteries surrounds the contents of the house’s secret room and what part it plays in the family’s tragedies. So what’s behind the red door on The Haunting of Hill House?

Warning: Spoiler alert for The Haunting of Hill House

By the end of the season, the room behind the red door is revealed to be the heart of Hill House — a room that would change itself into whatever the Crain family needed, in an effort to keep them in the house forever. Initially, Hugh (Henry Thomas) and Olivia (Carla Gugino) Crain, innocently purchased the home with plans of flipping it for a profit. But after moving in for the summer with their five young children, they soon notice water leakage from an upper floor. Mr. Dudley (Robert Longstreet), the home’s caretaker, tells them that the leak is coming from a moldy upstairs room with a locked red door.

With no key, and no way other way to enter, the red door remains closed. Two of the Crain kids, Shirley (Lulu Wilson) and her younger sister Nell (Violet McGraw), try jimmying the lock with no success and eventually leave, but there is some movement inside the room, signaling more sinister forces at play. But it isn’t until the Crain kids return to the home as adults, that the significance of the room is revealed.

Even after moving out of the house and going about their own adult lives, each of the Crain children have been deeply affected by their experiences in the house. The oldest brother, Steve (Michiel Huisman), has become a horror writer; Shirley (Elizabeth Reaser) runs a funeral home; Theo (Kate Siegel) has become a child therapist; Luke’s (Oliver Jackson-Cohen) PTSD from the house has driven him to addiction; and the youngest sibling, Nell (Victoria Pedretti) continues to be haunted by the ghost she saw in the house as a child.

When Nell returns to Hill House and commits suicide, the rest of the Crain family returns to mourn her. But when the house begins to play its evil games on the remaining family, Nell’s ghost comes out to save them and reveals the true nature of the Red Room and the house itself. The Crain siblings reunite in the Red Room, which just looks like an old unfinished basement and Nell gives them the eerie details. "Mom says that a house is like a body,” Nell tells her living siblings. “This room is like the heart of the house. No, not a heart, a stomach."

She tells them that the Red Room would change itself — it became a game room for Steven, a dance studio for Theo, a reading nook for Olivia, and a treehouse for Luke — to keep them comfortable, and eventually keep them there forever. “It put on different faces so that we'd be still and quiet,” she tells them, “while it digested." Hugh also provides a little insight on the house’s motives, telling his son Steve that the house wanted to “eat” them and still thinks of the remaining Crain kids as its “unfinished meal.”

There is so much to unpack in the season finale of The Haunting of Hill House, but thanks to some insight from Nell, the mystery behind the red door has been cleared. Fans are hoping to see the series return for a second season, and while there is no news as of yet, the remaining mysteries on the show do leave the door open for further storylines.