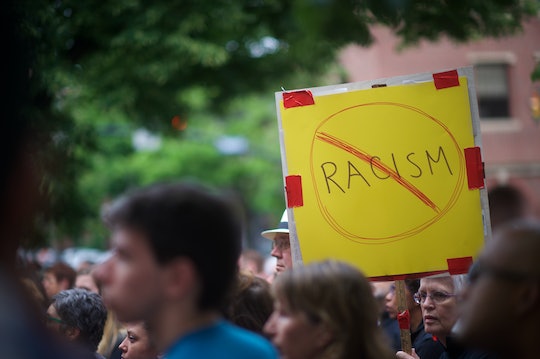 The NAACP Just Issued Its First Ever Travel Advisory, & Here's Why

In an unprecedented move for the organization, the National Association for the Advancement of Colored People just issued a travel warning. So what's happening in Missouri? It's the first time the NAACP has ever issued a travel warning for people of color in any state. The move comes after the passing of Missouri Senate Bill 43, which the NAACP alleges encourages discrimination against people of color and women.

The bill was signed into law by Missouri Gov. Eric Greitens in June, and makes it harder for employees to prove that their race or gender led to discrimination in the workplace. According to Missouri lawmakers, the bill is intended to prevent frivolous lawsuits, but the NAACP is calling it the "Jim Crow Bill."

The Missouri branch of the NAACP issued the travel advisory just after the bill became state law in June. But the advisory was brought to national attention last week at the organization's annual national conference.

The NAACP travel warning reads, "Individuals traveling in the state are advised to travel with extreme CAUTION. Race, gender and color based crimes have a long history in Missouri." The organization warns that any person of color should be aware of recent discrimination in the state.

The NAACP added to the warning:

The advisory means each individual should pay special attention while in the state of Missouri and certainly if contemplating spending time in Missouri. Unlike seasonal weather advisories, where no unnecessary travel on city streets or parking might be directed, the NAACP wants to make Missourians and our visitors aware of looming danger.

To justify the advisory, the NAACP cites the death of Tory Sanford, an African American man who died in a Missouri jail last May, though he was never arrested. Missouri has become a "hotbed" of racial tensions, according to the BBC — especially since the Ferguson riots in response to the shooting of Michael Brown by a police officer in 2014. In the travel advisory, the NAACP also cites the state's attorney general report that African Americans are 75 percent more likely to be stopped and searched based on skin color in the state than Caucasians.

Aside from the state's history of racial discrimination, the NAACP also notes in its advisory that Missouri Sen. Gary Romine's business is currently facing a discrimination suit, and that the state senator introduced the bill. It could potentially serve in the senator's interests.

The Missouri NAACP Chapter President Rod Chapel wants the law to be repealed before it goes into effect on August 28, which is when the NAACP's travel advisory is also set to expire. Chapel said of Romine's involvement with the passage of the bill:

I think there should be a full investigation. And if it is an issue where he is helping himself in passing this legislation ... I think it's important for the state senate or the government as a whole to make a determination for whether this type of action is OK.

Romine issued a statement on Wednesday defending the bill, noting that the law would not be retroactive, so that he would not benefit from its passage. He said that discrimination is "wrong," but that employers are often "punished and held liable even if discrimination didn't cause the adverse employment action."

For now, until the bill is repealed, Chapel and the NAACP are standing firm in their travel advisory. The organization will revisit the warning at the end of the month, when, or if, the bill goes into effect.