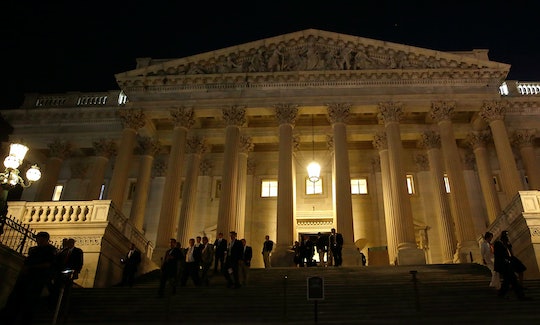 After months of limited answers and uneasy anticipation, congressional Republicans have finally unveiled their health care replacement plan. Suffice it to say, it's still as contentious as ever. As the conversation surrounding the Affordable Care Act (ACA) has been especially tense in recent months, many are understandably curious about what exactly is in the Republicans’ Obamacare repeal bill, and which specific provisions might be affected immediately, if any.

Under the bill, called the American Health Care Act, two popular aspects of Obamacare will stay in place: Young adults can stay on their parents' plans until the age of 26 and insurance providers cannot deny coverage for people with pre-existing conditions, though it allows insurers to charge higher premiums for those who have a lapse in coverage, according to CNN.

The 123-page legislation would essentially scale back the government's role in health care so that Americans are encouraged to purchase health care on the open market, according to The New York Times. These changes would most noticeably be seen in how individual tax credits and Medicaid programs have been handled since 2010.

According to The Los Angeles Times, the bill would restructure the tax subsidies that "help Americans who don’t get coverage through an employer to buy health plans" by replacing income-based premium subsidies with age-based ones, which experts say could leave millions uninsured.

Medicaid programs could also be affected. According to The New York Times, federal aid for these programs, designed for those with low income, is expected to "gradually end the expansion of Medicaid, which has provided coverage to more than 10 million people in 31 states."

The GOP bill also includes a provision that fulfills its party's promise to strip all federal funding for Planned Parenthood over concern that taxpayer money is used for abortion services. (It's not, unless it is in the case of rape, incest, or to save the life of the mother, under the Hyde Amendment.)

Additionally, the bill would eliminate the existing mandates that require larger employers to provide health insurance and fine people who don't carry it. The package would also repeal tax increases put in place by the Obama administration on affluent Americans and insurance and drug companies by 2018.

As House committees are expected to vote on the legislation as early as Wednesday this week, Congress remains divided on many of its details and many fear that this replacement bill will likely leave more Americans uninsured. While some movement has finally been made on this heated issue, albeit controversial, many of the key issues won't likely be solved or worked out fairly between the two sides any time soon.