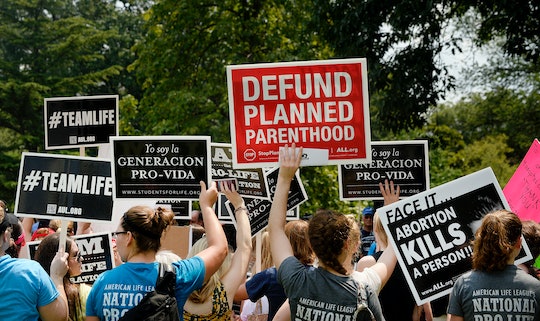 This Is How Much Taxpayer Money Goes To Abortions

One of the pillars of the anti-choice movement is that they do not want tax dollars to pay for abortions. But how much tax money covers abortions each year in real life? I hate to break it to you, fam, but no federal tax dollars have been spent on abortions since 1977, when the Hyde Amendment was passed just five years after the Supreme Court ruled on Roe v. Wade. So the government has essentially pretty much never paid for abortions. Tax money paying for abortions is simply not a thing, it's an anti-choice myth.

The Hyde Amendment is a rider tacked on to bills that mandates no federal money can be put toward abortion services. You might remember that the Hyde Amendment was one reason Democrats held up a Zika funding bill last year — Republicans insisted on tacking on Hyde Amendment language, while Democrats felt that funds should also go to helping a woman chose to terminate a dangerous pregnancy.

Likewise, President Trump signed an executive order this week reinstating the President Reagan-era "Global Gag Rule," which President Obama had removed — but that too is already largely a pointless gesture: The Helms Amendment, basically another version of the Hyde Amendment, prevents the United States from using federal tax money to pay for any international abortion services. Trump (and previously Reagan) signing the "Global Gag Rule" effectively means that no money is going to NGOs and non-governmental agencies that care for women overseas, despite the fact that none of it would have covered abortions anyway.

This might be confusing if you're caught up in the fight about "defunding" Planned Parenthood because it offers abortions. If no taxpayer money is "funding" abortions how can they now "defund" them in good conscience?

When people talk about "defunding" Planned Parenthood, what they mean is that they want Medicaid, an insurance program for low-income or elderly people, to stop reimbursing Planned Parenthood for patients who use their services — like PAP smears and prenatal care. Remember, in accordance with the Hyde Amendment, federal funds, such as Medicaid reimbursements, can't go to abortion services unless it is in the case of rape, incest, or to save the life of the mother.

States, though, can expand their Medicaid payments to bridge the gap. Right now, 17 states use Medicaid funds for "medically necessary" abortions, though 14 of them only do so because of a court order.

There is one state — good old South Dakota — that is in violation of federal Medicaid regulations because they only cover the cost of an abortion in the case of life endangerment, and not rape or incest. (Read: a low income mother on Medicaid who is raped and becomes pregnant would pay out of pocket for an abortion). So even when Medicaid (paid for by tax dollars) is supposed to go to help cover certain types of abortions, as previously defined, state governments often stand in the way. In Iowa, the governor himself gets to approve when Medicaid funds can be used or not in cases of abortion. So you better hope he likes you.

There is also Title X to consider, which is a federal program that gives grants to clinics that offer family planning services, but does not cover abortions because of the Hyde Amendment (ICYMI: the 1977 legislation prohibits any federal funding for abortion).

Recently, Obama signed an order saying that states couldn't deny that federal money for family planning clinics just because a clinic performs abortions, though that could easily be undone by the Trump administration. In further troubling news, H.R. 7, known colloquially as the No Taxpayer Funding for Abortion and Abortion Insurance Full Disclosure Act of 2017, which was introduced by Republican legislators this week, aims to bolster what the Hyde Amendment already does, and offers incentives to private insurers to drop their abortion service coverage altogether as well. In short, it's an all-out anti-choice spree on the Hill at the moment, and women will come out of it worse off.

In other words, the Hyde Amendment and Helms Amendment both make it so that no taxpayer is paying for abortions. But the "Global Gag Order" and other moves like it don't seem to take that into consideration.