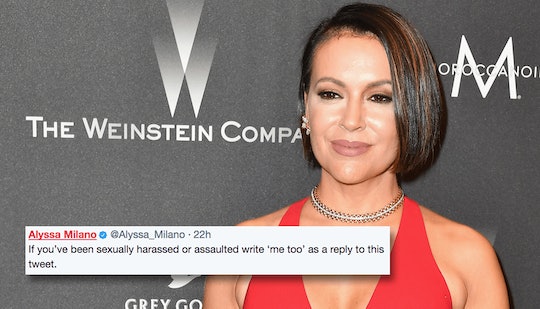 The One Lesson Parents Of Boys Should Learn From #MeToo

Chances are that by now, if you've logged onto Facebook or Twitter at least once today, you've probably seen a steady stream of #MeToo posts in your feeds. While some posts elaborate on specific examples of sexual harassment or assault, others simply post just the words "me too" or the hashtag. They are seek to accomplish the same goal: To show just how pervasive the sexual assault and harassment of women really is. The #MeToo conversation took off thanks to actress Alyssa Milano's Twitter account as a response to a culture of sexual harassment, assault, and even rape that the Harvey Weinstein scandal has exposed. But here's what missing from the #MeToo conversation: Men — and, more specifically, men pledging substantive change.

"If you’ve been sexually harassed or assaulted write ‘me too’ as a reply to this tweet," Milano tweeted on Sunday afternoon. Since then, her tweet has received more than 47,000 replies and nearly 17,000 retweets, while the #MeToo hashtag has steadily climbed as a trending conversation topic on Facebook. Men have been largely absent from the #MeToo conversation, although there have are two that deserve recognition: Actors Terry Crews and James Van Der Beek, who each took to Twitter to share how even as men, they too have faced sexual harassment and assault.

That said, as visible as #MeToo has made the ugly ubiquity of sexual harassment and assault among women, we need men to throw their lassoes around #MeToo, and not just with the faux platitudes that come in the form "As the father of a daughter..." Women need action, not hollow promises to "do better."

The avalanche of #MeToo posts cascading down social media feeds should horrify, disgust, and concern us. We need men to listen, respond, and participate. But men encouraging other men to "do better" has about as much power as "thoughts and prayers," in the wake of a national tragedy. Sure, "do better" sounds important, inspired, and motivated, but actually accomplishes nothing. For men to merely pledge to "do better" is actually pretty non-committal — they aren't obliged to actually do anything about the cultural problem of sexual harassment and assault. Pledging to "do better" sounds nice, but it's awfully vague.

What does "doing better" even look like in the context of rape culture? As the Weinstein scandal has uncovered, the sexual harassment and assault of women and girls is systemic. But let's be honest: You didn't need The New York Times to tell you that with its shocking expose on the Hollywood mogul. Eve Ensler's The Vagina Monologues have repeatedly told us about the culture of men's sexual victimization of women and girls around the globe for 21 years now.

But it's not just about fathers talking to sons: It's men talking to each other. Men need to hold each other accountable when they see women and girls being victimized. It's not enough to simply tweet that they'll "do better" — they need to be active advocates, not passive bystanders. Men need to confront sexual predation when they see it — but they also have to know what sexual predation and victimization looks like, too. They only way men can ever know that saying it's OK to offer a woman a job based solely on her looks is harassment is if they are taught it. This isn't something your local public school is going to teach.

Changing the culture of sexual victimization begins at home, and every parent — man, woman, or otherwise — can do better for their own kids.