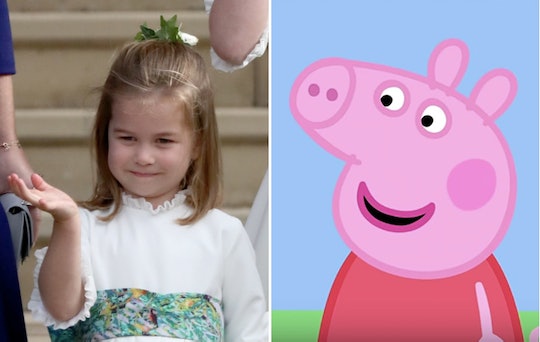 If Your Kid Likes 'Peppa Pig,' They Have Something In Common With Princess Charlotte

Although only 4 years old, Princess Charlotte continues to charm both the press and the public whenever she's spotted in public. But while the Duke and Duchess of Cambridge's only daughter is growing up as part of the royal family, it sounds like she's a lot like other toddlers in that she loves to play, dance, and watch cartoons. But what is Princess Charlotte's favorite TV show? If your kid is a fan of Peppa Pig, there's a good chance they have something in common with the young royal.

Back in May 2017, Kate Middleton revealed that Princess Charlotte loves Peppa Pig while speaking with school teacher Natalie Graham during a visit to Arlingham, Gloucestershire, according to Hello! Magazine. While learning about the day-to-day chores required to keep a farm running smoothly alongside a group of schoolchildren visiting from London, Middleton was given a birthday card the students had made for Princess Charlotte.

"She told them that they had a little party for Charlotte yesterday and she sung 'Happy Birthday' to herself!" Natalie Graham, the students' teacher, had said the Duchess of Cambridge told them, as Hello! Magazine reported. "It was so sweet. She loved the card and present and said Charlotte would love it too as the card had Peppa Pig on, which she loves."

Created by Neville Astley and Mark Baker, Peppa Pig is an animated British children's show aimed at preschool aged children. According to its official website, it centers around the adventures of Peppa Pig, "a lovable but slightly bossy little pig" who "loves jumping up and down in muddy puddles, laughing and making loud snorting noises."

But while Princess Charlotte is apparently a big fan of Peppa Pig, her older brother is reported to have already grown out of the children's show. In an April 2017 interview with BBC Radio 1, Prince William revealed, with some relief, that "George has gone past the Peppa Pig stage." According to Prince William, 5-year-old Prince George is now obsessed with the U.K. show Fireman Sam.

Despite Prince George having moved on to other children's shows, it seems as if Princess Charlotte isn't the only young royal to love Peppa Pig. As it turns out, Princess Charlotte and a number of other children were told they could watch Peppa Pig if, and only if, they stayed quite during Prince Harry and Meghan Markle's wedding at St. George's Chapel in May 2018. "One little girl was upset, but being comforted by the promise of Peppa Pig and Smarties later," jewelry designer Claudia Bradby revealed, according to People.

But while Princess Charlotte, like most 4 year olds, enjoys watching children's cartoons, her parents make sure she gets plenty of outdoor activity as well. "Her Royal Highness is a strong advocate for the proven benefits the outdoors has on physical and mental health, and the positive impact that nature and the environment can have on childhood development in particular," Kensington Palace said in a statement released in May. Kensington Palace shared that Princess Charlotte spent months collecting moss, leaves, and twigs with her mother and brothers for the Royal Horticultural Society's Back to Nature Garden exhibit.

Hopefully, Princess Charlotte's collecting work was rewarded with an episode of Peppa Pig or two. Perhaps even the one where Peppa and the gang get to meet the queen?