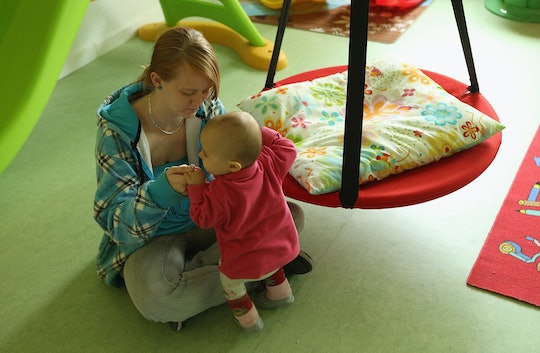 Single mothers are amazing. They raise their children without the emotional and financial support of a partner, oftentimes working full- or part-time jobs in conjunction with that herculean task. And while these women are capable of ushering well-rounded and healthy kids into a successful young adulthood, they're more often than not doing this on a much tighter budget than their counterparts in two-parent homes. The average income of single moms is less than one-third of the combined earnings of married couples with kids, Forbes contributor Aparna Mathur wrote. And even while this sometimes struggling demographic made about $36,780 on average in 2014, Donald Trump's fast-approaching presidency could could mean significant tax increases on them.

A trifecta of elements in Trump's new tax proposal would result in higher taxes for single-parent families, according to ThinkProgress. The president-elect intends to eliminate their "head of household" filing status, which will increase the proportion of their income that's taxable; do away with the tax exemption for each person in a household; and raise the tax rate on the lowest end of income from 10 percent to 12 percent.

"A single parent who's earning $75,000 and has two school-age children, they would face a tax increase of over $2,400," New York University law professor Lily Batchelder told NPR.

In general, single moms in 2010 were more educated as a whole than they were a decade before, but they are still the demographic of full-time workers most likely to be living in poverty, according to The Harvard Business Review. And those who don't work full-time may be financially restrained from doing so by exorbitant child care costs — and Trump's proposed child care policy is most likely to benefit the wealthy rather than low-income Americans, as it relies on tax deductions that by definition favor higher earners.

So, the projected effects of these two policies have the ability to create a debilitating catch-22 for working single parents, and single moms in particular. Of course, many of them can and want to work, but they can't make enough to sustain their families on one paycheck that's taxed more heavily than it was in the past. Add little relief for the high cost of daycare services while they're at work into the mix, and wages or salary earned may barely cover the basics, with little or no room for saving for college or emergencies.

The good news is that the president-elect's policies are not yet set in stone or up for a vote, so he has time to examine their possible real-world effects and improve upon them.