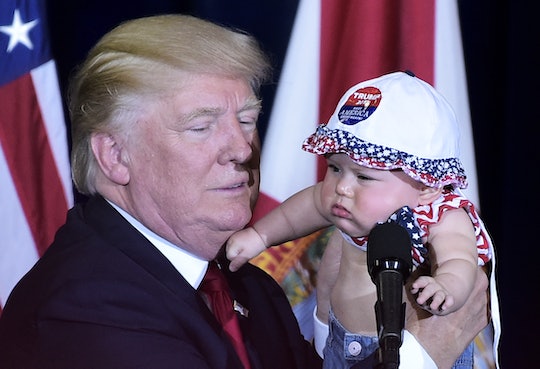 With his appointment of the known anti-Semitic, alleged white nationalist, and xenophobic Steven Bannon, along with a slew of other reportedly troubling candidates (all of whom are, of course, white men) to his personal staff, Donald Trump is showing that the trajectory of his impending presidency will mirror that of his oftentimes vitriolic campaign. Much of the country is demoralized and outright scared, struggling to identify even one point of hope or reassurance. At surface level, the fact that Trump has proposed to make child care more affordable could at least present some inkling that he cares about improving the lives of Americans who really need help, but a closer inspection of his proposed policy reveals that the promise to make child care more affordable for all families and the reality of that diverge.

When Trump first announced the plan over the summer, some aspects — such as the guarantee of six months of paid maternity leave for mothers — were at least an improvement from that this country already offers. Others — such as the omission of fathers' rights to access this perk — were roundly criticized as sexist and even regressive. But it quickly became clear that because the now-president-elect's child care plan hinges on tax deductions, it will most benefit wealthy parents like Trump's own daughter Ivanka, who helped to craft it, while largely ignoring the real needs of the middle and working classes who need a boost the most.

Essentially, Trump's plan is to enable families making less than $500,000 per year, or individuals earning less than $250,000 annually, to write off the cost of child care. But, by definition, tax deductions favor higher earners, and don't do much to ease the oftentimes astronomical cost of child care in this country for those most burdened by it. That's because many lower-income Americans don't owe federal income taxes at all because of their low salaries or wages, chances are slim they'd deduce any real benefit from these intended new policies.

"For folks who are in the upper earning bracket, who have a higher tax rate to begin with, and who are paying more money to have child care options like au pairs for example, those people are likely to receive large cost savings," Sarah Jane Glynn, director of women’s economic policy at the Center for American Progress, told ThinkProgress in August, when Trump first announced the plan. "Whereas a single working mom who makes around the minimum wage is going to get nothing out of this."

And perhaps equally draconian as categorically excluding fathers from participating in early child bonding experiences and from helping out after their birth or adoption, Trump's plan would also cover stay-at-home moms, meaning that they too could deduct the average cost of child care from their taxes, even if they are not actually paying for that service. And that's the equivalent of incentivizing women not to work, as University of Southern California law professor Edward J. McCaffery wrote in a CNN op-ed:

By helping out moms whether they work or not, the plan encourages women to stay at home; there's no extra break you get from working. That would seem to be the opposite effect of a good child care policy.

So, for families who are already well-off, the ones that aren't struggling, Trump's child care plan will be a nice bonus. Those who need a change, however, aren't likely to get one.