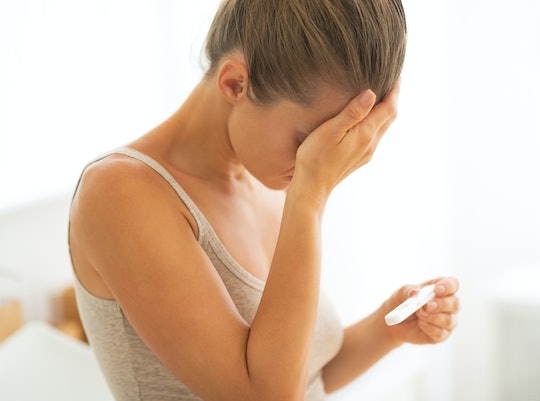 Everything You Need To Know About Chemical Pregnancies & Implantation Bleeding

There's nothing quite as disconcerting following a positive pregnancy test as looking down to notice blood in your underwear. I know because it happened to me. Right around that five-week mark of discovering I was pregnant, I found myself in a doctor's office worried about the light bleeding I had. It turned out to be implantation bleeding and today I have a beautiful daughter, but it wasn't until much later that I learned about the possibility of a chemical pregnancy, which has similar symptoms. So what's the difference between a chemical pregnancy and implantation bleeding?

“In a chemical pregnancy, a sperm has fertilized an egg, but the growing embryo results in miscarriage before it can be seen on an ultrasound,” Dr. Edward Marut, an OB-GYN at the Fertility Centers of Illinois, tells Romper in an email interview. “This usually occurs before the fifth week of a pregnancy.

Dr. Jaime Knopman, co-founder of TrulyMD, and director at New York's Colorado Center for Reproductive Medicine, breaks it down a bit further in terms of timing.

“Any bleeding when you are trying to get pregnant or when you think you are pregnant can be disconcerting to say the least,” she says in an email interview with Romper. “However, the timing of the bleeding is different for a biochemical versus implantation bleeding.”

For example, Knopman says, consider a woman who has a 28-day cycle. If she ovulates on day 14 of her cycle — meaning she releases an egg — then fertilization should happen shortly after that, typically within 12 to 24 hours of the egg being released. Implantation will generally occur five days after ovulation, once the embryo makes its way down the fallopian tube. From there, fertilization occurs in the uterus, leading to implantation.

“So, bleeding that occurs five or so days after ovulation is generally considered to be implantation bleeding,” Knopman says.

Of course, all of this is just helpful information should you run into bleeding during the early stages of pregnancy. After all, no one could have told me to stop worrying as I sat waiting for the results of blood work and, later, an ultrasound to ensure my daughter's health. (No doubt my first example of the innate worry attached to the life of being, and becoming, a parent.) But if you're experiencing bleeding in early pregnancy, consider how far you are out from your period and contact your healthcare provider.