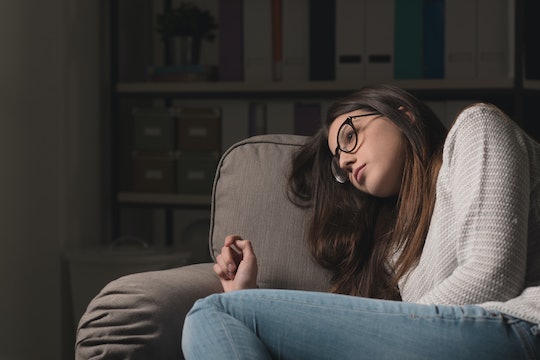 What Experts Want You To Know About Chemical Pregnancies

Miscarriage sucks — there's no better way to frame it. No matter how many kind people try to offer you comfort, the truth is there is no easy way to come to terms with losing a child. Of course, once some time does pass, you may begin to wonder what you could have done to prevent the loss. To that I have to first say, take heart — this was not your fault. But if you are wondering if there are any steps you might take the next time around, or are curious about how to prevent a chemical pregnancy, then here's what experts have to say.

First of all, what exactly is a chemical pregnancy? Dr. Rebecca C. Brightman, a NYC-based OB-GYN and assistant clinical professor at the Icahn School of Medicine at Mount Sinai, tells Romper it’s actually “a very common phenomenon.”

“Essentially, an egg is fertilized, implants only briefly in the uterus, resulting in a transiently positive pregnancy test,” she says. “Many chemical pregnancies go unrecognized, but some over-the-counter pregnancy tests are super sensitive and can detect a pregnancy even before a missed period.”

Chemical pregnancies are responsible for around 75 percent of early pregnancy losses, according to What To Expect. Like Brightman explained, a fertilized egg begins to implant in the uterus about three weeks after your last period and the placenta begins to form the pregnancy hormone hCG, meaning that it might be high enough to be detected by a blood or urine test, noted Everyday Health. But for some reason, implantation never happens and bleeding begins about a week after your regular period was due. It should be noted, however, that bleeding after a positive pregnancy does not always mean miscarriage, and instead could be a sign of implantation bleeding, suggested the American Pregnancy Association.

But can this type of miscarriage be prevented? Unfortunately, like most miscarriages, chemical pregnancies are most often the result of genetic abnormalities and out of your hands, according to Parents. Doctors do, however, recommend pre-conception visits in order to review medical history, as well as consulting with a doctor after any type of miscarriage.

“If a woman has been trying to conceive and has experienced several chemical pregnancies, she should discuss this with her healthcare provider to see if there is a reason as to why this may be happening,” Brightman says.

Genetic testing can be tough at the biochemical stage, says Dr. Salli Tazuke, the co-founder and co-medical director of Colorado Center for Reproductive Medicine in San Francisco. She explains that a pregnancy sac, or gestational sac, can be first seen by pelvic ultrasound around five to six weeks from your last menstrual period, and the earliest you can see a heart beat is around six to seven weeks. If a pregnancy stopped growing, it is possible to obtain pregnancy tissue and confirm if it is due to chromosomal abnormalities.

“But when the pregnancy loss is at the biochemical stage, we cannot obtain tissue to diagnose causes such as abnormal chromosomes in the pregnancy,” she says.

Tazuke says some women with irregular menstrual cycles or polycystic ovarian syndrome (PCOS) may have insufficient female hormones to support the early stage of pregnancy and may benefit from hormone supplementation.

“If the pregnancy loss is due to chromosomal abnormalities, then there are no treatments for correcting this, but you can undergo assisted reproductive technology (ART) or in vitro fertilization (IVF) and test embryos before implantation to see if the chromosomes are normal,” Tazuke says. “This can be considered if you have had multiple miscarriages.”

At the end of the day, pregnancy loss is a painful and difficult journey for one in four women. In fact, that’s the only comforting part of the experience — there are women who can relate to your devastation. In fact, “it’s OK to be sad” was some of the most helpful advice women received following a miscarriage. And it really is.