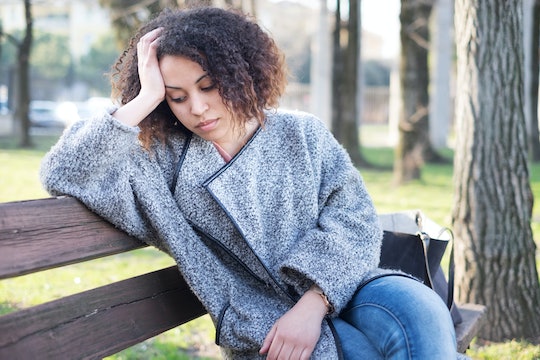 Everything A Mom Suffering From Multiple Miscarriages Needs You To Know

Miscarriages aren't talked about enough. In fact, I rarely thought about miscarriages before I started experiencing them myself. Then that's all I could think about. It's so hard to talk about a pregnancy loss, but silence just exacerbates the isolation you can't help but feel after you miscarry. That's why there are things a mom suffering from more than one miscarriage won't tell you, but I will. I believe it's undeniably important to understand what often goes unsaid, so that a woman suffering from such a loss can be supported. Or, so that same woman can support herself, knowing she's not alone.

I've said it before and I'll say it again and again: silence about truth is not helpful. In fact, if you're anything like me, it can be the difference between resiliently overcoming loss and falling down a deep, dark hole of depression. In fact, I hear it over and over again from other women living through the same experiences. Once a person has a miscarriage they want to know they're not alone. They want to know that it's OK to talk about their devastation and loss.

Sadly, however, the message we repeatedly get is that it is not OK to talk about our devastation and loss. Our miscarriages make other people uncomfortable or unsure or sad-by-association, so we should just suffer in silence. Well, I absolutely refuse to accept this flawed and hurtful logic. If sharing the following things I felt after multiple miscarriages helps just one person feel less alone, it's worth it.