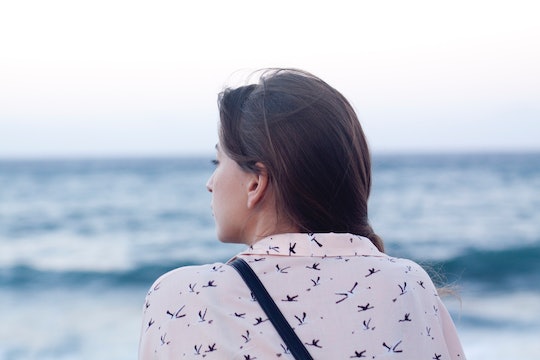 Pregnancy can be one of the happiest, most exciting times in a person’s life. But it can also become one of the most painful, especially once you’ve experienced a pregnancy loss. Miscarriage, which occurs when a pregnancy is lost within the first 20 weeks, counts for 10-25% of all pregnancies, according to the American College of Obstetrics and Gynecology, and each miscarriage is different for every parent.

My first experience with miscarriage was through a close friend. She and her husband had just gotten married and were ecstatic to have gotten pregnant so quickly. Then one afternoon I got a call from her husband who informed me that the baby, simply, was “gone.” She was early in her pregnancy, about 7 or 8 weeks in, but from the moment I went to their home to visit and give my condolences, I knew their loss was monumental.

Years later, I would have my own experience with pregnancy and infant loss due to pre-term labor, after which I would find myself connecting to a network of other women who had been through similar experiences. I met people who'd experienced chemical pregnancies (which make up 50-75% of miscarriages), ectopic pregnancies, stillbirths, who lost babies to pre-term labor like I did, and who lost their babies to various illnesses or SIDS. Getting to know these women, I realized how difficult and isolating it can be for all parents, no matter how long into its course a a pregnancy was when it was lost. Many of those who had miscarriages had the least amount of support, with folks around them not really understanding that their early loss was still a heavy loss.

Fortunately, some were also told helpful and supportive things after their miscarriages. Many were kind enough to share these things with me, and my hope is it might help some of you out there, whether you’ve experienced a miscarriage yourself or want to help a loved one going through it yourself:

One was people acknowledging that it was a real loss (even just an, “I’m sorry” or that maybe something was wrong). The most specific thing was a friend who was a massage therapist and energy worker who told me that we are all here to learn something, and maybe that little ball of cells / life / energy still just needed to learn to grow.

A dear friend encouraged me to name my baby (her name is Hope) and to keep track of her (she is 15). It made her a person I could have a relationship with, and therefore someone I could properly mourn.

Acknowledging her personhood, her existence, her name.

I was attending a random church service (I go so very sporadically) and the preacher was talking about bad things happening. And he said, “Sometimes things happen and you think it’s bad, but really maybe you just weren’t ready for that thing to happen.” It was so vague but it hit a spot for me. I don’t think I was ready at the time.

When they sent cards or gifts, something that acknowledged it happened.

The most helpful and validating thing anyone told me was that it was OK to feel my feelings and be sad.

Someone who I’m FB friends with and know casually in real life (a customer from where I worked 5 years before my loss) sent me flowers on the day of my D&C. I was floored. I’m still grateful for her.

My bestie showed up and gave me a hug and brought sushi. No platitudes. Just food and hugs.

I was really struggling with anger and jealousy after we lost our baby. A friend who had a miscarriage at 8 months told me the best advice she got was to try not to feel angry at other pregnant women, or women with newborn babies, because you never know what they went through to get there. And knowing how many women I’ve talked to in the past four months that lost babies or struggled to even get pregnant, I know I’m not alone and that I shouldn’t feel jealous, because when I do get pregnant again, I wouldn’t want other women looking at me with anger.

My therapist said to hold ourselves as gently as we held him. Meaning, when the guilt is overwhelming, banish the negative self talk and instead work on feeling our grief and practicing self-care.

The things that helped the most were people simply saying I’m sorry and giving me a hug. Two of the biggest things I can think of...on my first day back at work, a nurse who’d been on vacation and hadn’t heard what happened excitedly asked me how far I was because she’d just found out her daughter was about as far along. My throat closed and I couldn’t speak. I was about to break down and another co-worker said it for me and then led me away to make sure I was OK. The biggest [comfort], though, was when my best friend, who I admittedly had grown apart from and hadn’t even told I was pregnant yet, drove all the way up here and spent the day with me. She made me shower and put on real clothes.

My hubby stepped up and called my mom and dad (separate calls since they are divorced). My mom flew down to help out for a couple of days. I kind of dreaded talking to my dad, but when he called, he acknowledged that this was a huge loss and it was horrible that it happened. He doesn’t tend to be great with emotions, so I was very surprised.

Acknowledging that I lost a baby and (that it was) not “just a miscarriage."

My first miscarriage was at 7 weeks. My step-sister said to me, “When a woman finds out she’s pregnant, she immediately plans and thinks about the whole life of her child. It doesn’t matter if you’re 7 weeks or 7 months.” This helped me understand and validate my pain.

My OB office sent flowers to my room during my D&C. That helped ease the pain a little, that someone acknowledged the loss. I had a few friends drop off food, hug me, and leave. That helped a lot, too. But I think the most helpful was doing things in honor of their lives. We chose names, planted a tree, and donated in their names.

I think my sister helped me the most when she told me that I could grieve however I needed to and take as long as I needed.

It wasn’t anything in particular that was said, but my best friend was on the phone with her mom talking about my daughter as if she was here.

The nicest thing anyone ever said to me on the subject was a non-judgemental, non-explanation-filled, heartfelt, “I’m sorry for your loss,” without any, “but you wouldn’t want that many kids anyway,” or “that guy you married is a jerk, how many babies of his would you want?” or, “God has a plan.”

More Like This
Who's Getting Abortions? Mothers. 59% Of Abortion Patients Already Have A Child.
A C-Section Actually Doesn't Take As Long As You Think, According To Experts
All Your Questions About Getting Pregnant After A Tummy Tuck Answered
Are Movie Theaters Too Loud For Pregnant People? OB-GYNs Explain