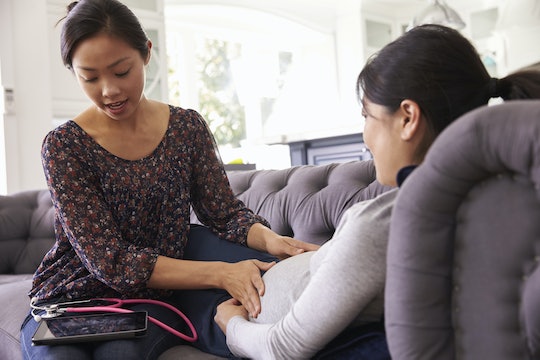 The Difference Between A Tipped & Tilted Uterus

It's not totally unusual to think about your uterus, but for many, its the direction of their uterus that concerns them the most. From tipped to tilted, the terms can seem scary and overwhelming. But what's the difference between a tipped and tilted uterus? Do either cause any issues down the road?

The terms can get confusing and there are a lot of misconceptions about them, but it turns out, a tipped uterus is just another name for a tilted uterus. The American Pregnancy Association also noted that the condition can be known as a retroverted uterus, too. Good news? No matter what name you call it, it's still totally harmless.

Shefali Shastri, MD, and FACOG of Reproductive Medicine Associates of New Jersey (RMANJ), tells Romper that having a tilted or tipped uterus is a normal anatomical variant and she compares it to being right or left-handed. "In most women, the uterus tilts slightly forward towards the bladder," Shastri says. "In a smaller percentage of women, the uterus can tilt back towards the spine."

According to the American Pregnancy Association, the tilt or tip of your uterus can be the result of childbirth or conditions that cause scarring like endometriosis or fibroids, but it can also just happen naturally as you mature — your uterus may never have moved into a forward position.

But it won't impact you too much. Shastri notes that a tilted or tipped uterus shouldn't have any affect on a woman’s health later in life, nor should it interfere with her ability to conceive or carry a child.

If you do experience symptoms, the American Pregnancy Association noted that pain during sex and pain during menstruation are some of the more common signs of a tipped or tilted uterus. But chances are, you won't realize you have this condition until your doctor gives you a pelvic exam.

So no matter what you call it, just remember that the tilt or tip of your uterus is no big deal. It won't affect your chances of getting pregnancy or how you carry a child — you just might hear it called several different things through your doctor visits. (That's OK. It's just preparing you for the confusion that is parenthood.)