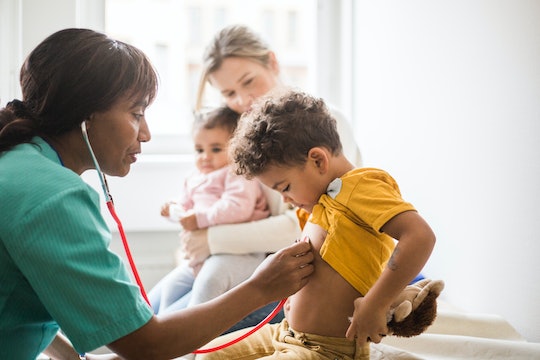 Heat Rash & Measles Can Look Similar, So Here's How To Tell The Difference

Child vaccination rates fell this year, according to a recent report by the Centers for Disease Control (CDC). It’s not off the table for children to get the measles, but heat rash is already a common childhood skin condition. Instead of freaking out over every bump or patch of red or brown skin, it’s important to know what to look for especially as the weather warms up and everyone wants to know the difference between measles and heat rash. While one is caused by a highly contagious virus, the other is uncomfortable, but easier to treat. There’s more you need to know about measles and heat rash, according to experts.

Dr. Gary Kramer, M.D., a pediatrician at Pediatric Specialists in Coral Gables, Florida, says that a measles rash "usually is a flat Erythematous rash that starts on the face and then spreads diffusely to the rest of the body." Whereas, a heat rash "is the consequence of sweat glands blocked and thereby not allowing sweat to evaporate from the surface of the skin." He continues by saying that a heat rash "occurs more commonly in clothed parts of the body and resolves as the skin cools off." So if your child's rash begins on their face and spreads, check in with your child's doctor immediately, especially if they have other symptoms of the virus. If your child's rash begins in covered parts of the skin or skin folds and seems to get better with topical soothing treatments and they have no other symptoms, it's likely a heat rash, according to Dr. Kramer.

Pediatrician Dr. Hela Barhoush, M.D., of Riverside Medical Group in Hoboken, New Jersey, explains that measles and heat rash are different in both appearance and symptomology. “In addition to rash, measles is accompanied by other symptoms such as fever, congestion, cough, red eyes, and blue-white spots inside of the mouth we call Koplik spots,” says Dr. Barhoush. Koplik’s spots start appearing early on and are often among the first symptoms, Healthline reported. They'll also start to fade as other symptoms disappear.

"With the increase in rates of unvaccinated children, there have been some outbreaks of measles in recent years," Dr. Kramer says, but he also notes that sometimes vaccinated children can occasionally develop a rash after vaccination. He advises moms to bring their child in to see a doctor if they have any doubts, just to be safe.

Being a mom is hard enough without having to worry about serious and deadly childhood illnesses making a comeback, but the CDC warns that a measles outbreak is a very real possibility. So when it comes to measles, knowledge is power. If your child has a rash with fever, runny nose, red and watery eyes, and other symptoms that look like a cold or flu, definitely check in with your pediatrician as soon as possible.

Heat rash, on the other hand, is just that — a rash. The most common type of heat rash, also called miliaria rubra or prickly heat, happens to about 30% of children, according to Verywell Health. Dr. Barhoush notes that it doesn’t occur with any other symptoms. “It usually occurs in warmer weather and on areas on the body underneath clothing where air cannot circulate, such as the neck creases, chest, and abdomen,” she says. “The rash is characterized by very fine red bumps that usually have a prickly feeling when you rub your finger over it.”

Like with most rashes, kids will experience some mild itching. Another type of heat rash, miliaria crystallina is more common in babies. This form of heat rash looks like fluid-filled blisters and bumps, which looks as terrible as it sounds, but Mayo Clinic explains it's the mildest form of heat rash. It only affects the top layer of skin, unlike miliaria rubra. Heat rash typically goes away “rather quickly on its own once the skin is aired out," says Dr. Barhoush.

All rashes can be scary, but it's good to educate yourself on the difference between a harmless skin irritation and something more sinister. In the summer months, when there's more sweat and heat that can cause a rash on your child's skin, it's good to know that's likely all it is if they're not otherwise sick. But still, don't hesitate to bring your child in to be examined if you have even the slightest doubt. It's always better to be safe than sorry, especially when it comes to your child's health.

This article was originally published on Aug. 23, 2018