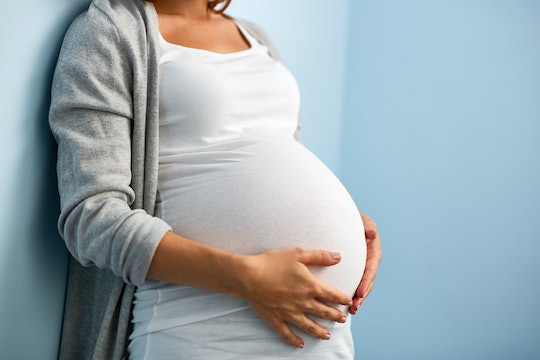 Here's What That Noise Your Vagina Makes When You're Pregnant Means

Listen, pregnancy may be a beautiful thing, but it definitely has its moments that are less lovely and more like a frat house. Specifically, the noises (and smells) that will escape your body while you're housing another human being inside of you. So what's the noise your vagina makes when you're pregnant? Should you be concerned, or is it just another way pregnancy is turning your body into a wonderland?

Turns out that fart-like sound coming from your lady parts isn't any different than the fart-like sound your vagina omits when you're done having sex. Basically, it's a queef and it's just like the ones you experience when you aren't pregnant. According to Women's Health, a queef is what happens when air gets caught in the folds of your vagina. Unlike a fart coming from your rectum, which is caused by bacterial activity in your gut, a queef is just air making its way out from the wrinkle-like folds of your vagina.

So why does it happen more often when you're pregnant? Parents noted that there's really no medical literature to explain why. Those fart-like noises aren't bad and they don't mean anything is wrong, they just happen, and can most likely be chalked up to new sitting and standing positions (thanks to that growing belly), trying different positions during sex, and your pelvic floor muscles getting worked a little more than usual.

And don't worry, those vagina farts shouldn't smell or make anyone run for cover. The only time you should worry about air in your vagina is if your partner purposely blows air into your vagina while you're pregnant according to Dr. Stephen Weiss, OB-GYN and Assistant Professor of General Obstetrics and Gynecology at Emory University. "Oral sex with active blowing of air into the vagina has had complications of air embolism," Weiss tells Romper. "But oral sex without forced air is safe."

Remember, air being pushed out is fine. Air being pushed in? Not so great. But don't worry, your vagina will take care of that noise for you without any work on your end. Just relax and chalk up those mysterious fart-like sounds coming from between your legs as another wonder of pregnancy. The fart-like sounds coming from the other side, however, are not as easily forgettable. (As long as you get that pregnancy glow, right?)