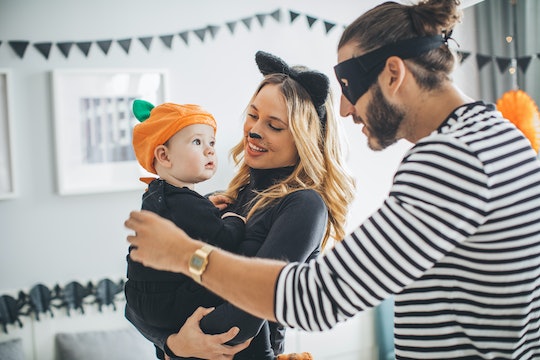 When Are Babies Scared Of Strangers? Experts Weigh In

Some folks just can't help themselves. If they see a baby, it's like they must make faces at them, wave to them, or just say hi before they burst. (It's me. I'm some folks.) Sometimes this goes well. Other times the baby is terrified. But when are babies scared of strangers? I would like to know so I don't cause a meltdown by waving to a baby who is just minding their own business.

Dr. Kelly Luu, a pediatrician at the Kids Clinic in Vancouver tells Romper, “A neurotypical child can display stranger anxiety as early as 4 to 6 months old, but usually most evidently around 9 to 10 months old.” So you know, that age when they seem most likely to respond to your waving and cooing.

“Around 8 months, babies can begin to be uneasy, teary, and even a little panic stricken if they can’t see their ‘person’ — usually mom,” says Ann McKitrick, an early childhood specialist with Nurtured Noggins. “Fortunately for them, this is about the same time they learn to crawl, so they can usually make their way to you when they can't see you."

Luu says that stranger anxiety has to be understood in a cultural context. “Infants will often look to their parents and interpret their expression to know if a situation is safe or if there is perceived danger,” she says. “The infant’s reactions may be a response or model of the parental behavior toward strangers. As well, it may be an adaptive behavior to keep a child safe as they explore their environment in a safe and secure manner.”

But what exactly is going on in baby’s brain when they’re fearful of strangers? McKitrick says it's hard to know, but often the fear is due to the way new people approach babies. “When your baby is in your arms or lap, and the new person keeps their distance and lets the baby approach them at their own pace, they'll likely warm up and be friendly.”

And, she adds, babies are people who need to take a moment to size up new acquaintances to decide if they want to be friendly. “It's good to respect that and gently introduce new people to your baby,” she says.

This is also totally expected. Luu says that being scared of strangers is a normal developmental milestone, and “a sign of intellectual development when children learn to recognize their environment and learn to differentiate what is familiar and what is novel.”

Bonus? Both Luu and McKitrick say that a fear of strangers shows that the baby has a healthy attachment to their parents and shows they may have a strong bond.

As for when this phase ends, Luu says, “It could dissipate between 2 or 3 years old, but for many children it’s not unusual for it to continue into toddlerhood.” You really don't need to worry about it unless it becomes significant and interferes with your child's ability to interact with peers and/or join activities.

More Like This
Is It Good For Babies To Be Exposed To Germs? It’s Complicated
Can You Give A Sleeping Baby A Breathing Treatment? Experts Explain
We Have To Talk About This Fish That Will Pat Your Baby's Butt Until They Fall Asleep
Here’s What To Do If Your Baby’s Nose Bleeds After Suctioning