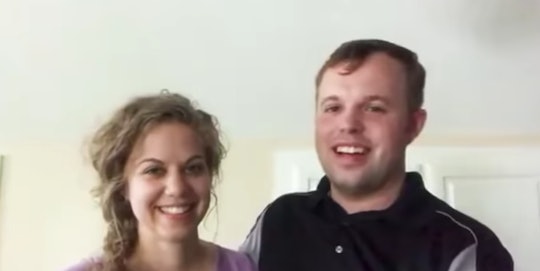 If John David Duggar & Abbie Burnett Follow This Pattern, This Is When They Could Tie The Knot

Just when fans thought the Duggar family was done celebrating, they proved everybody wrong. On Wednesday, second oldest son, John David Duggar had a very exciting announcement: he got engaged to his partner-in-courtship Abbie Burnett. Now that Duggar and Burnett are engaged (yay) there is only one thing on everyone's minds: When are John David Duggar and Abbie Burnett getting married?

After just one month of dating each other (things move fast in the Duggar family) both Duggar and Burnett announced their engagement to Us Weekly on Wednesday, telling the magazine that they couldn't wait to wake up next to each other every single day for the rest of their lives. And they knew pretty early on in their relationship that it's exactly what they wanted to do. "The proposal and the 'yes' really solidified the fact that we want to spend the rest of our lives together," Duggar told Us Weekly.

And just as fast as they fell in love, Duggar and Burnett told Us Weekly that they are already thinking about their wedding and that it was "next on their agenda." With so much time to think about their wedding, it could be a matter of weeks before the couple ties the knot. Unfortunately, no set date has been confirmed yet (and in the past, the Duggars have set fake wedding dates to throw fans off). But, if fans look to the past Duggar engagements, they can get a feel for when Duggar and Burnett might walk down the aisle.

The actual average length of a Duggar engagement? Three months — trust me, I did the math.

This means that fans can likely look to John David and Burnett walking down the aisle during the fall. Because, let's be real, if they were only dating for one month before they got engaged, it's likely that they'll folkow suit with a wedding, too. But who knows? John David Duggar could pull a fast one on fans and wait until the new year to get married. You never know with the Duggar family.

No matter when John David and Burnett decide to get married, they really are just so excited to have one another in each other's lives — and they owe it all to God. The couple told Us Weekly:

One of the most amazing things about following Christ is being able to trust Him to your direct path and lead your life. We are so thankful that He led us to one another.

The best thing about the Duggar family having short engagements? The celebrations keep on coming.