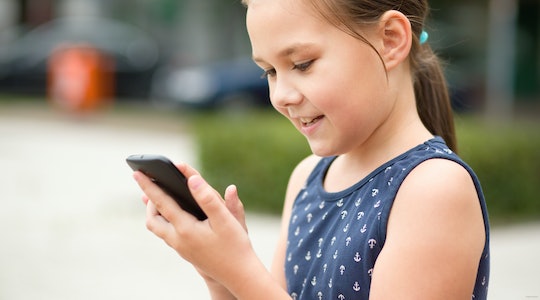 Millennials are often thought of as hip and in-the-know when it comes to technology. But while you may be comfortable using apps to do just about everything from paying a friend back to tracking your sleep quality, you may still falter when it comes to teaching your kids about technology. After all, today's parents grew up without the same array of devices their kids have access to. That makes it hard to answer questions such as, "When are kids ready for their own phone?" You want them to be safe and connected when they're away from you, but what's the right age?

"Instead of a date on the calendar, consider independence milestones as ways for your child to demonstrate that she’s ready," writes media expert Devorah Heitner, PhD, author of Screenwise: Helping Kids Thrive (and Survive) in Their Digital World. I talked to Heitner on the phone about what these independence milestones are, when it's not a good time to give your child a smartphone, and how you can mentor your kids and model good habits with your own smartphone behavior.

According to Heitner, the three most important independence milestones that signal your child's cell phone readiness are the ability to handle conflict, disappointment, and privacy. She points out that while safety is most parents' primary concern with cell phones, social and emotional issues are actually a bigger problem. For example, think about the smartphone-related issues you've had to deal with. Have you ever misread someone's tone in a text message and mistakenly concluded that person was angry with you? Felt sad when you discovered on Facebook or Instagram that your friends were hanging out without you? What about nude photos or recordings of sexual activity? Has anyone ever shared something you wrote in a text without your permission? It's hard enough being in your 30s and grappling with these situations. Before you give your child a phone of their own, you want to know they're mature enough to resolve conflict, regulate negative emotions, and understand what not to share.

This is why mentoring and modeling of appropriate phone behavior is so important. Heitner points out that most parents view a cellphone as a convenience, making it easier for them to stay in touch with their kids. In fact, giving your kid their own phone is "a parenting responsibility," she says. Before you make this big decision, ask yourself what outcomes you hope for. Also consider what your child wants to do with a smartphone. You don't have to add social media apps right away, Heitner says. Instead, you can start your child on texting and mobile internet browsing.

On the other hand, Heitner reminds us, many kids already use social media platforms like Facebook on the computer. Some parents have the illusion that a phone is such a big deal, but in fact their kids may already have a personal YouTube channel, Facebook account, and so on. And even if your kid doesn't have a phone yet, they could still be exposed to disturbing material on a friend or classmate's phone. The bottom line is that all the digital parenting controls in the world won't guarantee that kids never use technology inappropriately. Heitner advises parents to talk to their children about the range of upsetting material on the internet. These conversations will vary depending on your child's age, but the most important thing is for your kid to know they can always talk to you, even if they've done something you told them not to such as sharing their phone number with a stranger.

Long before your kids are ready for their own phone, they learn how to use one by watching you. So the best way to start mentoring your kids on smart phone habits is to model the behavior you want to see in them. Observe yourself over the course of a day. Do you sleep with your phone by your bed? Check it first thing in the morning before doing anything else? Heitner suggests asking yourself these questions to assess areas of improvement for yourself.

Once you've decided that you and your kids are both ready for them to have their own phone, timing is everything. Heitner notes that many parents give phones as birthday presents or winter holiday gifts, but that can backfire in a season when there is already a lot going on. Remember that a phone is a responsibility, not a toy, so Heitner recommends separating it from special occasions as well as stressful times like divorce. Wait until you and your child have time to focus on learning how to use the phone wisely.