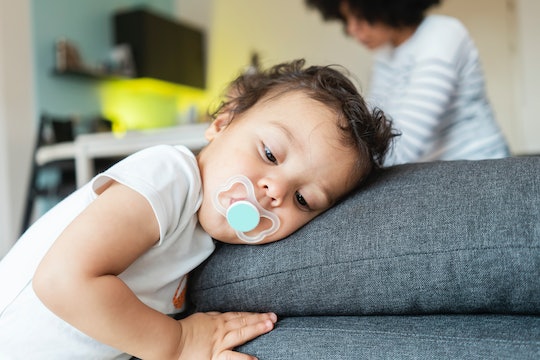 Here's When It's Safe For Your Toddler To Sleep With A Pillow, According To An Expert

As a new mom, you probably decorated your baby's nursery with adorable color-coordinated crib bedding — but no pillows. Every pediatrician, baby book, and parenting website routinely hammers home the message that pillows and stuffed animals are a suffocation risk. But if you're about to switch out that crib for a big-kid bed, you may be wondering when it's safe for a toddler to sleep with a pillow.

The short answer: It depends.

"For a child to have anything in the crib with them, they need to be able to move well on their own: sit, roll, stand," Elizabeth Murray, M.D., a pediatrician at Golisano Children's Hospital in Rochester, NY, tells Romper. "For most children, this is after one year old."

If this sounds overly cautious, it's for good reason: Approximately 3,500 infants die in the United States every year from sleep-related causes. Among those causes are sudden infant death syndrome (SIDS), as well as suffocation from sleeping on pillows, sofas, and other soft surfaces.

"The risk [of suffocation] is incredibly high," says Dr. Murray. "While little babies do not roll, they do move some during sleep. Propping up on a pillow results in the baby's actually slouching down the pillow as they sleep, causing their head to come forward, which can make it difficult to breathe."

Pillows are a hazard for infants in any setting, Dr. Murray adds, including car seats, play pens, and portable cribs. "Plus, babies just don't need pillows. They are comfortable snuggled in a wearable blanket or sleep sack."

Once a baby is old enough to roll over, the risk of suffocation from soft surfaces increases. One large study of SIDS victims published in the journal Pediatrics found that children aged 6 months to a year were more likely to have been found lying in their cribs on their stomachs with blankets or other soft objects around.

The risk doesn't stop at pillows, either. Crib bumper pads — originally designed to prevent babies from sticking their heads through crib slats — are believed to reduce air flow in the bed and can smother a baby who rolls too close, according to the advocacy group SafBaby. "Some cities and states have banned the use of crib bumpers, because they do pose the risk of suffocation and provide no safety," Dr. Murray notes.

But as children develop the strength to sit, stand, and walk independently, they're capable of changing their position as they sleep, and a pillow is less likely to block their airway. For some kids, that may be as early as the 1-year mark. Other children may be closer to age 2; still other toddlers may have developmental delays that make it unsafe to sleep with pillows until they're older. When in doubt, check with your pediatrician.

"Remember, pillows provide no purpose other than comfort," says Dr. Murray. "A child may not have any interest in pillows until they're 3 years or older."

If your toddler's shoulders are wider than their head, they like lying on your pillow, and/or they put their head down on stuffed animals, those are a few additional indications that it could be time for a real pillow, according to Child Safety Experts.

If and when you do decide to put a pillow in your toddler's crib or big-kid bed, keep it simple. Dr. Murray recommends a toddler pillow rather than an adult-sized model, which may be too thick and uncomfortable for a little head.

Unlike adults, who often sleep in one position, "toddlers still move around a lot in their sleep," says Dr. Murray, so it's not necessary to look for a pillow designed for a stomach or side sleeper.

As far as material goes, Dr. Murray says that as long as there are no allergy issues, you can choose either a feather or fiber fill. However, pediatric sleep consultant Julie Kennedy, along with Elizabeth Pantley, noted author of The No-Cry Sleep Solution, have told Care.com that a flat, firm toddler pillow is best — preferably with a hypoallergenic polyester or natural fiber filling. They also cautioned against using an adult pillowcase on a toddler pillow, as the additional material could be a suffocation hazard.

How about those oh-so-cute convertible pillows that transform into animal shapes? Dr. Murray warns that they might be too stimulating for bedtime (translation: your kid will be up half the night folding and unfolding the darn unicorn). She adds that they can also be difficult to clean thoroughly.

Speaking of cleaning, you'll probably need to wash your toddler's pillow more often than your own, particularly during cold and flu season, when little noses get runny. "A pillow-lining cover in addition to a traditional pillowcase might be helpful, because a lot of toddlers drool in their sleep," adds Dr. Murray.

Whichever type of pillow you choose, here's to sweet dreams for your toddler — and for you!

This article was originally published on July 9, 2018