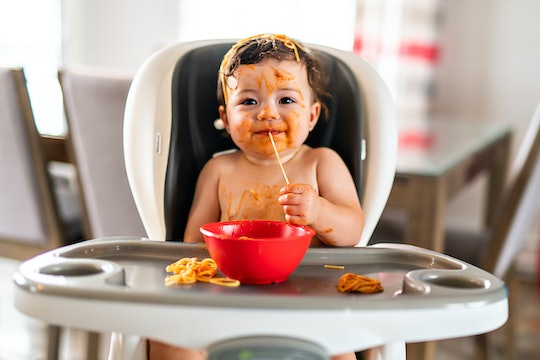 Growing up, my pasta of choice was macaroni and cheese because I'm a southerner and also a red-blooded kid. My husband's, however, was spaghetti. His mom is a third-generation Italian, and his great grandmother immigrated from Italy. So basically his biggest concern about becoming a parent was figuring out when babies can eat noodles. For Christmas, we serve my husband's great grandmother's recipe of Christmas "gravy" and rigatoni, meatballs, and sausage, and our kid missing out is just not an option.

Last Christmas, our son Jack was 7 months old (and only had two front teeth), and while he was eating solids, we were still a little nervous to give him something like spaghetti noodles or rigatoni noodles. But this year, he definitely had his very own plate of meatballs and pasta. Could we have given him the actual food of the gods that first Christmas though?

Melanie Potock, a pediatric speech language pathologist and feeding specialist, tells Romper in an email interview, "Babies need teeth to tackle longer noodles, like spaghetti. But if parents chop up the noodles, babies as young as 6 months can rake up the noodles in their little fists and try to eat the smaller pieces. Kids this age won’t have the fine motor skills or dexterity to pick up each noodle individually, so a small pile on the plate or tray can make them easier to grasp. Another strategy is to toss the chopped noodles with a few breadcrumbs to add a bit of texture, making the noodle easier to manage in both the mouth and the hands."

So it looks like, once again, I was being overprotective of our first baby, and he could have had some of the rigatoni chopped up. As far as the "exact" age of when babies can tackle spaghetti noodles, Dr. Lisa Lewis, a board-certified pediatrician and author of Feed the Baby Hummus, Pediatrician-Backed Secrets from Cultures Around the World, tells Romper in an email interview, "Typically, spaghetti noodles can be introduced between 8 and 9 months, just like any other finger food. To start finger foods such as spaghetti noodles, a baby must be able to sit up with good head control and also have the ability to readily grab food from the plate."

Lewis adds, "Although this point may be debated in other countries, most pediatricians in the United States and many parts of Europe agree that the spaghetti noodles should be chopped into pieces and cooked well to soften." Pretty sure that with this knowledge, my husband had spaghetti in his bottles from birth.

As far as other "noodles" like macaroni and cheese, Potock says, "Babies can start with macaroni and cheese or other mixed dishes that have noodles as early as 6 months of age. However, check with baby’s pediatrician before introducing dairy right away. Most babies can tolerate a small amount of dairy at first, but it’s always best to check with your family’s physician, especially if dairy intolerance or allergies run in the family. Remember to cut all noodles into small pieces, about the size of baby’s thumb or smaller."

Lewis also says to try to make your baby's macaroni and cheese yourself to ensure there is "real" cheese in there for the nutritional benefits. But at 8 or 9 months old, "spaghetti is no more difficult to eat than other pasta, provided it is well-cooked and cut into small pieces," she says.

So if you're ready for all those messy spaghetti face photos for Instagram, or just desperately want an easy dinner of buttered noodles, your baby can totally dig in. Just cut them up so they're easier for baby to grab, and teach them the beauty of a bowl full of noodles.

Dr. Lisa Lewis, a board-certified pediatrician and author of Feed the Baby Hummus, Pediatrician-Backed Secrets from Cultures Around the World

More Like This
6 Bizarre Superstitions About Christmas Babies
25 Winter Solstice Baby Names For Your Magical Little One
40 Lovely, Lively, Lavish Girls Names That Begin With “L”
Baby Growth Spurts: When They Happen & What To Expect