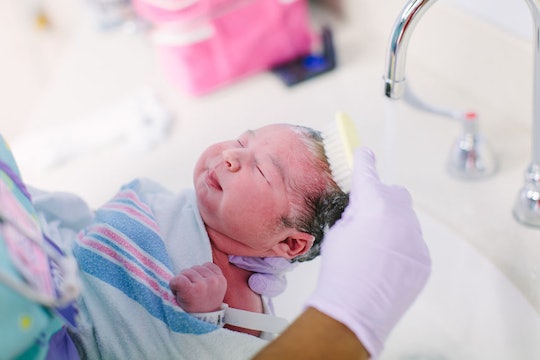 Can You Claim Your Newborn On Your Taxes This Year? It Depends On This One Thing

Babies bring so many new things to your life: a love you never knew existed, the ability to function on three hours of sleep, a constant parade of dirty diapers. They also bring additional returns on your taxes (woohoo!), but having a little one doesn't automatically mean you can claim your newborn on your 2019 taxes. It actually depends on exactly when your bundle of joy was born.

Long story short, your baby has to have been born in 2018 for you to be able to claim them on the taxes you fill out in 2019. But there's no specific birth date necessary to claim them, despite rumors that circulate that you had to have given birth at least six months before the end of the year to claim them. As Andrew Siegel, CPA, explains, "A new baby born on any date during a calendar year can be claimed as a dependent on the tax return for the year the child is born." So if you gave birth in February or on New Year's Eve of 2018, you're good to claim them come April. But Siegel went on to say that "if a child is born on January 1, 2019, the exemption would be claimed on the 2019 return which would be filed in 2020," so you would have to wait a whole year to claim your New Year's day baby. And if your little one did come into the world on the first day of 2019, those 365 days of waiting to be able to claim them will be pretty painful, because having children has a pretty significant impact on your tax return.

Kids affect two big portions of your taxes: the Child Tax Credit and the Earned Income Credit. Spoiler alert, both give you money back for procreating. As the Tax Policy Center explains, the Child Tax Credit gives qualifying parents or caregivers a credit of up to $2,000 per child 16 years or younger, and how much you get back depends on how much money you made. The legislation applies through 2025, so you can expect to get about two grand for every child you have for the next six years. The credit benefits many families, but the Center also notes that "families in the lowest income quintile are least likely to benefit from the credit because more of them will not have sufficient earnings to qualify for the credit." Yep, you read that right: you have to have an income of a certain dollar amount to be able to get the credit back, even though lower income families would benefit from it the most.

The Earned Income Credit, on the other hand, is designed to benefit low income working parents, giving the most credit to the families that earn the least money. Indeed, there is a maximum dollar amount you can make to qualify, so higher income families aren't eligible for the credit. For instance, if you have one child and make approximately $40,000 or less on your own or $46,000 or less between you and your partner, you can receive up to $3,461 from the EITC according to Nerd Wallet. And the credit is even higher if you have more kids. To qualify for EITC, you have to have an income of some kind (makes sense), as well as meet some other detailed requirements. TurboTax gives a specific rundown on all the necessaries.

So if you gave birth at any point in 2018, make sure you take advantage of all the tax breaks your newborn can provide. You'll probably end up spending the money on them, anyway. Here's to motherhood.