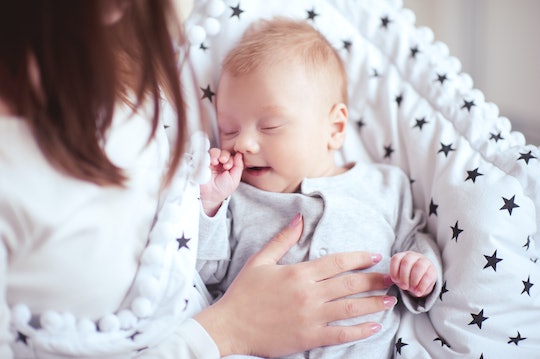 When my son began rejecting his pacifier at just 2 months old, I remember a feeling of panic came over me at the thought of him no longer being able to soothe himself. But, like with everything that comes along with parenting, I had to adjust quickly and roll with it. I couldn’t force him to use a pacifier if he kept spitting it out, which is exactly what he did. Luckily it wasn’t long before he developed an affection for his soft plush baby blanket. But when can your baby sleep with a security blanket? It seemed like it would help him catch some Zs, so at around 6 months old, I allowed my son to sleep with it only while supervised since he was still room-sharing. I remember putting him to sleep in his co-sleeper and letting him grab his little blanket, watching as he blissfully rubbed his face in all of its soft glory. To this day, he continues to sleep with his monster blanket, “Monsty” (yes, she has a name and a gender), and in a way, she's become part of our family. While I had no problems allowing him to sleep with his small blanket, I made sure to pay attention to all the other safe sleep guidelines for infants.

According to the American Academy of Pediatrics (AAP), a child should avoid using any loose blankets or stuffed animals for the first 12 months. Board-certified pediatrician Dr. Natasha Burgert of KC Kids Doc tells Romper in an email, “Babies should have bare, boring cribs until their first birthday. After the first birthday, they can have a small 'lovey' or thin blanket in the crib as they sleep." The AAP says allowing your child to sleep with a blanket before their first birthday increases their risk for Sudden Infant Death Syndrome (SIDS), so it’s best to take out any extra bedding, including stuffed animals.

In 2016, the AAP revised their standards for safe sleep practices, which now include sharing a room with your infant for a minimum of six months, and ideally for the first year. But the new revision still advises against sharing a bed with your infant, using crib bumpers, bedding, or any large loose objects that can get tangled around your baby's face or neck. You should also avoid any loveys with small, hard pieces that can come off. For example, a stuffed animal with sewn-on buttons for eyes can be a choking hazard. The AAP still maintains their position on the “back is best” rule, too, where placing an infant on their back is the safest sleep position. However, some of the new regulations may not be as obvious to parents.

According to the AAP, room-sharing, but not bed-sharing, for the first 6 to 12 months of life could decrease the risk of SIDS. However, more research is needed as parents who room-share are more likely to practice unsafe sleep habits such as using blankets and bed-sharing. Sharing your bed with your infant can be dangerous because of the increased risk of accidental suffocation. This risk increases when the infant is under 4 months old, was born pre-term or with a low birth weight, if you or your partner smoke, or have consumed alcohol. The AAP stated that bed-sharing can also increase your child’s risk for SIDS.

If you're worried about your baby being cold without a blanket, try using a sleep blanket instead of swaddling. Sleep blankets are wearable zipper blankets that can help keep your baby warm without having potentially dangerous loose bedding in the crib. Swaddling is not advised for infants past the age of 2 months, noted the AAP, making sleep blankets the best option for infants older than 8 weeks. I remember using sleep blankets for my son when he began to break out of his swaddle. He wanted his arms to be free, so I began using a sleep blanket to help keep him warm at night while still giving him room to wave his little arms and kick his legs as he pleased.

My son’s security blanket has been a savior when it comes to soothing and comfort, and I don’t know what we would do without Monsty. She’s there for every bedtime, snuggle session, and even has magical healing powers for boo-boos. But while SIDS is rare, children are most susceptible to it in their first year of life. Allowing your child to sleep with their security blanket is wonderful and can be really comforting, but it’s best to wait those 12 months.

More Like This
What Parents Need To Know About Sleep Training & Breastfeeding
When Can A Baby Sleep On Their Stomach? Doctors Weigh In
What To Do If Your Baby Sounds Congested
Why Does My Newborn Shake Sometimes? A Pediatrician Explains
What Parents Are Talking About — Delivered Straight To Your Inbox