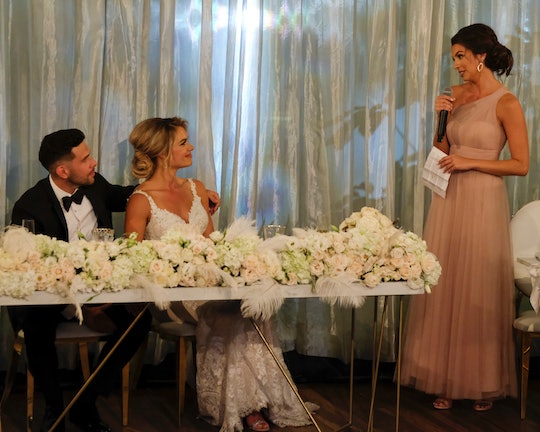 Clay & Angela Reunite After Their Breakup On 'Bachelor In Paradise'

When Clay, from Becca Kufrin's season of The Bachelorette, descended the steps into Paradise, he immediately caught flack from Annaliese, a good friend of Angela's from the previous summer. Clay and Angela had dated — outside the context of the show, through mutual Bachelor Nation friends — for several months between seasons and, according to Annaliese, they were on the verge of moving in together. And yet, there Clay was, participating in Season 6 of BiP. The whole thing has left fans wondering when Clay and Angela broke up, especially as his relationship with Nicole progresses. It's pretty messy.

Here's the official timeline, according to Us Weekly. Clay and Angela made their relationship Instagram official in September of 2018. Angela had requested an introduction from Clay's Bachelorette co-star and her Bachelor in Paradise Season 5 buddy Chris Randone, who returned to the show this season to marry his Paradise girlfriend, Krystal Nielson. Of course, Angela was a bridesmaid at the wedding and Clay was invited as a current cast member, which thrust the two back in the same room after their relationship ended. Us Weekly confirmed their split on Apr. 20, 2019, saying it happened over a month ago. Just a few weeks later, Clay was in Paradise, looking for new relationships.

The core conflict here is that Clay and Angela seem to have very different interpretations of their relationship. In an October 2018 episode of The Ben & Ashley I. Almost Famous Podcast, Angela claimed that she and Clay were considering moving in together; she was just waiting to hear where he got signed for the upcoming football season. But when Clay didn't get picked up by any teams, he told Angela that he needed to break up so that he could figure out who he was outside of football.

Showing up in Paradise looking to get engaged mere weeks after telling someone he wasn't ready to be in a relationship was not a good look for Clay, to say the least — especially because Annaliese was on the beach, ready to call him out in front of everyone. But, Clay and Nicole hit it off, and when he assured her he was "100 percent over" Angela, she believed him. Angela did confront Clay at the wedding reception, which Nicole was conveniently left off the guest list for, and it got pretty awkward.

Clay probably dug himself a deeper hole by telling Angela that he still cared about her, especially because he claimed earlier that the relationship had been disintegrating for months before the "official" breakup. Unfortunately for Nicole, this won't be the end of Angela in Paradise. She shows up next week, not just as a wedding guest, but as a contestant. Cue yet another love triangle, which could honestly be avoided if Clay stopped trying to handle all his suitors with kid gloves. It doesn't really seem like Clay is still hung up on Angela, but he's definitely saying things to appear nice and caring which make it sound like he is. Someone will likely be leaving the beach upset, and from the looks of next week's preview, it might be Clay himself.