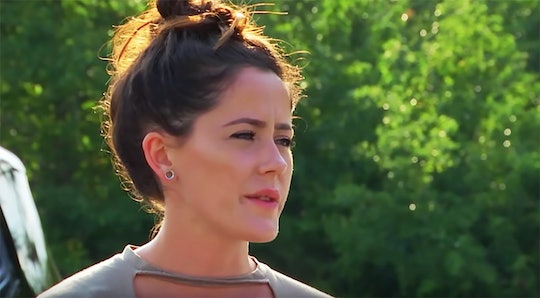 Teen Mom 2 star Jenelle Evans' relationship with her husband, David Eason, has seen its fair share of headline-grabbing drama throughout the years. And given the media frenzy surrounding the pairing, it's fair that some fans want to know when Jenelle Evans and David Eason got married. As it turns out, the two got hitched not too long ago.

Evans met Eason via the dating app Tinder sometime in 2015, later making their relationship official in September of that year, according to Us Weekly. Similarly to Evans' past relationships, her romance with Eason progressed quickly, culminating in an August 2016 pregnancy announcement. "Time to introduce the world to our baby girl soon, Ensley Jolie Eason," Evans captioned the Instagram announcement. "She will be arriving Jan. 28th. We couldn't be any happier!"

Little Ensley made her debut on Jan. 24, 2017, just months before she tied the knot with Eason on Sept. 23, 2017, according to E! News. At the time of this writing, the couple have been married for one year.

And what a doozy that year has been, to put it mildly. There have been plenty of disturbing incidents between the two, but what particularly stands out to me is the October 2018 911 call Evans made against Eason, alleging that he physically assaulted her during an argument, according to audio obtained by TMZ. Evans later attributed the concerning call to a "drunk misunderstanding," according to People.

The other troubling situation are the reports of Eason allegedly shooting Evans' young French Bulldog, which occurred sometime during the first week of May. Eason claimed in a since deleted Instagram post that the puppy, which the family got in August 2018, snapped at Ensley, therefore prompting him to take the supposedly (emphasis on supposedly) necessary steps to protect his family, according to Us Weekly.

Evans was heartbroken about the incident, writing in an emotional Instagram post: "I love you so much and I’m so sorry. I’m speechless."

Evans and Eason did not immediately respond to Romper’s requests for comment regarding the 911 call and the reported death of Nugget.

After news of Nugget's death, Evans told E! News that she was "considering" divorcing Eason due to his actions.

"I have not gone back to my home yet because he is refusing to leave," Evans told the outlet. "I won't see him and don't want to talk to him. Thankfully the kids did not see him shoot the dog. They are still with me. I am very much considering pressing charges against him for this."

Evans later returned to her home, however, sharing the news via her Instagram Stories. "Got 7 eggs this morning!” the reality star captioned a shot seemingly taken from the North Carolina house she shares with Eason, according to Us Weekly.

It's not clear what's going to happen with Eason and Evans' relationship in the future, but it's pretty obvious that they need to work on some issues before moving forward. But most of all, the focus should be on the daughter they have together and the other children they have from past relationships.