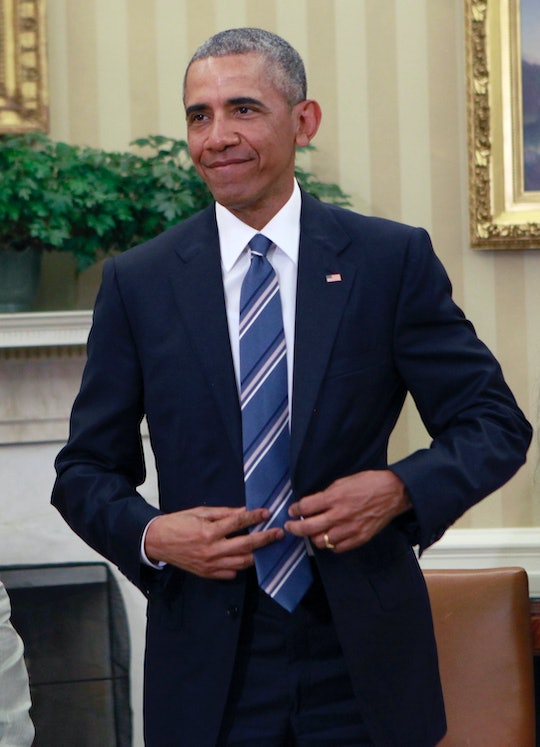 When Did President Obama Film His Endorsement Video For Hillary Clinton?

Hillary Clinton has had quite a week. On Tuesday, she became the Democratic Party's presumptive nominee for president, and on Thursday, the man whose job she wants announced that he believes she's the right woman for the position. The announcement, which came via a video posted to Clinton's official Twitter account, went online right after President Obama met with her opponent, Vermont Sen. Bernie Sanders, to talk about party unity. The timing is certainly right, and as it turns out, Obama shot his endorsement video for Clinton on Tuesday, the same day she won enough delegates to make her nomination at the Democratic National Convention next month inevitable. Without a doubt, it seems the president knew, just as well as Clinton herself, that things were all but set in stone.

Even when major news outlets were declaring Clinton the winner of the Democratic primary on Tuesday, Sanders publicly reaffirmed his commitment not to drop out of the race.

"Next Tuesday, we continue the fight," Sanders said at a Santa Monica rally June 7, The Los Angeles Times reported. "We are going to fight hard to win the primary in Washington, D.C., and then we take our fight for social, economic, racial, and environmental justice to [the Democratic National Convention]."

Democrats, though, have been calling for Sanders to end his campaign and focus on uniting against presumptive Republican nominee Donald Trump in the November general election. In his Clinton endorsement video, Obama lauds Sanders for his " incredible campaign" and refers to the "great meeting" the two had. So, of course, the video couldn't go live until the two politicians actually met.

They did, and when Sanders emerged from the White House after a little more than an hour Thursday afternoon, he pledged to collaborate with Clinton, according to CNN.

"I look forward to meeting with [Clinton] in the near future to see how we can work together to defeat Donald Trump and to create a government which represents all of us and not just the 1%," the candidate told reporters.

Still, he didn't relinquish his position as a presidential contender. Although even POTUS has unequivocally announced "I'm with her," the 74-year-old Sanders isn't ready to give up what has almost certainly been his only chance at winning the White House.

In his endorsement, though, Obama made it clear that there is a place for Sanders in Clinton's campaign and possible presidency:

I had a great meeting with [Sanders] this week, and I thanked him for shining a spotlight on issues like economic inequality and the outsized influence of money in our politics, and bringing young people into our process. Embracing that message is going to help us win in November. But more importantly, it will make the Democratic party stronger, and it will make America stronger. Secretary Clinton and Senator Sanders may have been rivals during this primary, but they’re both patriots who love this country. They share a vision for the America that we all believe in, an America that is hopeful, an America that big-hearted, an America that is strong and fair and gives every child the same chance that we had. Those are the values that unite us as Democrats.

This sentiment was an overt olive branch extended to Sanders' passionate supporters, among many of whom Clinton is decidedly unpopular. In order to defeat Trump, Clinton will have win the trust of the "Bernie Bros" and others who "Feel the Bern." Many of them, unfortunately for the party establishment, right now say they won't consider supporting Clinton.

But if anyone knows about getting on board with Clinton after squaring off against her, it's Obama. As he notes in his endorsement video, he debated Clinton more than 20 times during the 2008 Democratic primary before she conceded defeat.

It's hard to say what effect Obama's endorsement will have on Sanders' decisions about his own campaign. White House Press Sec. Josh Earnest said in a press conference after the video's release that Sanders wasn't surprised by it, so he probably doesn't begrudge Obama for it. If party unity is the goal, though — and it is — a Sanders concession speech is the next logical step.

More Like This
The President Of Ireland Wants To Get Rid Of Homework & Honestly, He's Onto Something
Zoe Saldaña Shared A Rare Video Of Her Three Sons Recreating A 'Zoolander' Scene
Dwyane Wade's 4-Year-Old Daughter Kaavia Recorded A Sweet Video For His 41st Birthday
'The Last Of Us' Is Based On The Iconic Post-Apocalyptic Video Game
What Parents Are Talking About — Delivered Straight To Your Inbox