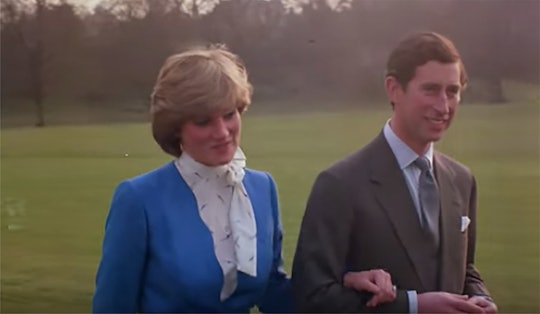 The stigma surrounding divorce has lessened throughout the years, and it's hard to imagine the subject as scandalous today. But for the royals, broken marriages aren't as common, which might explain why the public lost its collective cool when Princess Diana and Prince Charles got divorced decades ago. In fact, it was pretty much the only thing anyone could talk about at the time.

When Lady Diana Spencer married Prince Charles, eldest son of Queen Elizabeth II and Prince Phillip in July 1981, it was just about the most romantic story on the planet. Sweet, shy nursery school teacher marries the next King of England in a beautiful ceremony at Westminster Abbey. The only way it could be more of a fairy tale is if her wedding dress was crafted by hummingbirds or something. The whole world was full of hope and happiness just at the sight of the couple kissing on the balcony of Buckingham Palace.

To the public eye, things appeared to progress rather beautifully from that point on. Princess Diana gave birth to Prince William in June 1982, just under one year after getting married, and then went on to welcome their second son Prince Harry in September 1984. While they seemed to be pretty happy together, what with being royalty and all, behind the scenes things were not going well. Princess Diana was suffering terribly from postpartum depression, which she bravely opened up about in an effort to end the stigma in a 1995 interview, according to HuffPost.

As for Prince Charles, in 1986 he allegedly began an extramarital affair with his then ex-girlfriend, Camilla Parker-Bowles, according to People. Despite their supposed unhappiness, the couple would end up staying together for several more years. There were rumors that the royal couple were potentially unhappy, but nothing was confirmed until May 1992, when Andrew Morton published the biography Diana: Her True Story In Her Own Words, which outlined in detail Prince Charles' affair and her unhappy life in the palace. That's when the entire house of cards came falling down around them.

From then on, things moved quickly. In 1994, Prince Charles gave an interview where he admitted to having an affair with Camilla Parker-Bowles, according to The New York Times, and in 1995, Diana herself gave a similar interview with BBC's Martin Bashir. After all was said and done, they officially divorced in 1996 after 15 years of marriage and two children together. Princess Diana reportedly said to Prince Charles at the time, "Why did this have to happen?" But the public can't know for certain what actually transpired. What is clear?Princess Diana went on to make a beautiful life for herself through her charity work and her sons, until she died in a car crash in Paris, France, in 1997.

It's a tragic end to a fairy tale beginning, but Princess Diana's memory lives on in her children and philanthropy. And it's completely OK that her marriage with Prince Charles didn't work, as her relationships never defined her brilliant life.