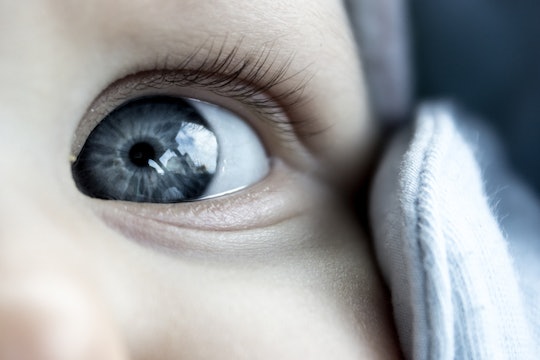 Your Baby's Eye Color Will Be Determined By This Age

When you're holding your adorable newborn for the first time, you just can't get enough of every detail: their perfect tiny fingers, their thick mop of hair (or the sweet baby fuzz), the petal-soft lips. Then you look into their little eyes, and if they're a pale blue, you wonder: When will my baby's eyes change color?

The answer: Not as soon as you might expect, and maybe not at all. "Most babies are born with blue or gray eyes," explains Dr. Jen Trachtenberg, assistant clinical professor of pediatrics at the Icahn School of Medicine, The Mount Sinai Medical Center. She explains to Romper that our eye color is determined by the amount of a dark pigment called melanin, which is activated by the exposure to light we get after birth. "In newborns, the process is still developing, and it can darken over time, depending on how much of the pigment is produced," she says. "Usually, darker-skinned babies have darker eyes to begin with, and lighter-skinned babies often have lighter blue eyes at the start."

The melanin itself is brown, explained Parents magazine. When only a small amount is produced, our eyes appear blue or green; more melanin in the iris, and the eyes get darker.

The color change process is a gradual one, and the final shade typically isn't established until a baby is nine to 12 months old, explains Dr. Trachtenberg. A baby whose eyes are still blue at the half-year mark could still go brown by their first birthday.

Whether your baby's eyes will be ocean- or earth-toned depends on you and your partner — and your parents as well. "Eye color has a lot to do with inheritance and genetics," says Dr. Trachtenberg. "Even two brown-eyed parents may have a blue-eyed child if one of the grandparents had light or blue eyes."

Fun fact: According to the American Academy of Ophthalmology, brown eyes are the most common color in the world, appearing in more than half the population. Thousands of years ago, everyone had dark eyes; it's believed that all blue-eyed people can be traced back to a single ancestor who was born with a gene alteration that resulted in the unusual shade.

Eye color change doesn't happen in reverse, however. A baby born with light-colored eyes may wind up with dark ones over time as the melanin activates, but a child who starts life with brown eyes won't suddenly go sapphire.

As with other genetically determined traits, you can't predict what any subsequent children's eyes will look like based on your firstborn's peepers. According to the Morgridge Institute for Research, a biomedical facility, there are more than a dozen genes that influence eye color, and a complex mix-and-match game is involved with every child. Depending on what colors run in the family, you might have an identical set of brown-eyed offspring or a combination of light and dark eyes. Even among siblings with the same basic eye color, shades can vary. (I'm a brown-eyed mom with two blue-eyed children; one has bright blue irises, while the other has gray-blue eyes that seem to change depending on what she wears. Go figure.)

While most children's eye color stays the same after their first birthday, it is possible for the shade to change for several more years, according to the American Academy of Ophthalmology. They point to a study of twins that showed that up to 15 percent of white individuals experience eye color change into adolescence and adulthood.

Seeing a change of eye tint in an older baby or toddler isn't a cause for alarm, says Dr. Trachtenberg. It may simply be a case of the genes kicking in later than usual. However, she adds, "if you notice any other discrepancies, such as one pupil looking smaller than the other, always consult your pediatrician."

Your children's eye color will always be as individual as they are, and while it's fun to predict what shade they'll end up with, in the end, it's like Forrest Gump's famous quote about a box of chocolates: You never know what you're going to get.

Edit note: this post has been updated from an earlier version to state Dr. Jen Trachtenburg's correct title.