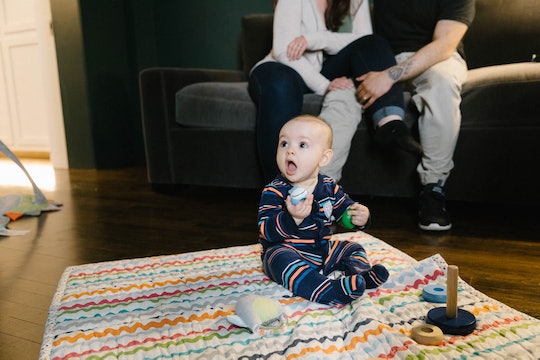 When You Can Expect Your Baby's Growth Spurts

Since kids don't come with instruction manuals, you tend to spend a lot of time as a parent trying to figure out what exactly is going on. Babies, in particular, can be giant question marks. They're happy one minute, crying the next, and sleeping only when you need them awake. A lot of their fussiness is often attributed to growth spurts, but when do babies hit growth spurts? Knowing what could be coming can sometimes help ease your parenting anxiety.

According to Miami-based Dr. Gary Kramer, M.D., Fellow of the American Academy of Pediatrics (F.A.A.P.), throughout your baby's first year of life, you'll notice they sporadically increase their feeding frequency and behaviors. "Sometimes," Kramer says, "these times are associated with increased hunger, more frequent waking, and fussiness. These periods are referred to as growth spurts, and commonly occur at 1 to 3 weeks, 6 weeks, 8 weeks, 3 to 4 months, 6 months, and 9 months." They tend to be short-lived.

According to Parents, there's a few ways to tell that your little one could be in the middle of a growth spurt. Babies seem to eat non-stop when going through a spurt, so yours may want to suddenly breastfeed constantly, or want bottle after bottle. (If you are breastfeeding, short, frequent nursing sessions will also build your milk supply up more than longer, infrequent sessions.)

In addition to frequent eating, an increase in fussiness is also common in growing babes, as Parents mentioned. The fussiness can be due to a number of things, one being the fact that they're getting less sleep because they're up to eat more often. But, rest assured, the end of a growth spurt is usually capped off by a few days of sleeping more than usual. As it turns out, 80 percent of growth hormone is secreted during sleep, and your baby needs to sleep in order to produce those hormones.

Though there's a few periods when growth spurts are common, babies tend to go through mental and emotional developmental leaps frequently as well. If your baby seems more hungry, fussy, or tired than usual, it might be a sign that a growth spurt or leap is in effect.

If you're concerned with any unusual behavior or drastic changes in appetite or sleep patterns, always talk to your pediatrician.