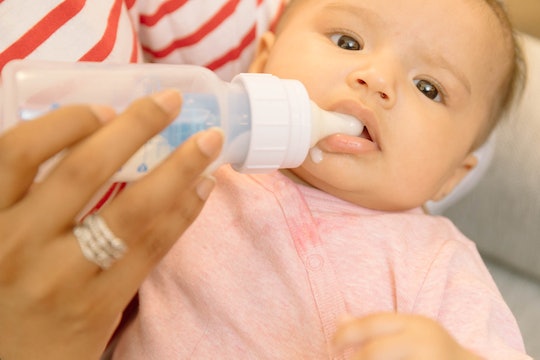 When Your Baby Hits This Age, You Can Officially Stop Giving Them Formula

For women who can't or choose not to breastfeed, the invention of baby formula was a godsend. Created to imitate the nutrition found in breast milk, formula has been used to feed babies since the mid-nineteenth century. Over the years, formula has evolved into a gigantic business and has helped parents around the world nourish their babies. This is great when they are tiny, but what about as they get older and their nutritional needs change? When should a baby stop drinking formula?

Most pediatricians agree that babies should be weaned from formula at a year old. By that time, they also should be eating a diet that is mostly solid foods, with full-fat cow's milk serving as supplemental nutrition, not as the main source of it. C. S. Mott Children's Hospital in Michigan recommends 1-year-olds get 16 to 24 ounces of whole milk per day. Even if you yourself are adding skim milk to your latte, the hospital stresses on their website that you should make sure you're giving your little ones full-fat milk, as kids under the age of two need the extra fat from whole milk to help with the development of their brain.

Nutrient-dense nourishment is very important in baby's first year of life. While the American Academy of Pediatrics encourages breastfeeding where possible, non-breastfeeding ways to nourish babies have been around for years. Emily Stevens, Thelma Patrick, and Rita Pickler are three nurses who collaborated on a history of infant feeding that was published in the Journal of Perinatal Education. It turns out that women have been using different types of animal milk to feed their babies since 2000 BC. If women didn't breastfeed because they were upper class and chose not to, or because they were ill or in same cases died in childbirth (we're talking a long time ago), the only options were some sort of animal milk or using a wet nurse. A wet nurse is another woman who has previously given birth and still had a milk supply, who would feed your baby her own breastmilk. As the years went on, there was a reluctance to let another woman nurse their babies and soon formula was invented. It's been helping moms nourish their babies ever since. Even nursing moms will oftentimes use it to supplement their breastmilk.

Dr. Natasha Burgert, a pediatrician in Kansas City, tells Romper via email that she recommends parents not only stop using formula at a year, but they should start giving their children sippy cups instead of bottles at this time as well. "Toddlers should not need additional 'bottles' of whole milk if they are eating well," Dr. Burgert says. Sippy cups are this great hybrid which combine the structure of drinking out of a cup with the non-spill function of a bottle. They are easy to carry around with you and wash in the dishwasher.

If you're wondering if sheep's, goat's, soy, or rice milk are as good as cow's milk, the Women's and Children's Health network says that when your baby is under 12 months old, those milks don't have the right balance of vitamins, iron, etc. and shouldn't be subbed in for breastmilk or formula. After they hit the one-year mark, you can start using soy milk, but look for soy milk with added calcium.

Whether you are breastfeeding or formula feeding, the one year mark seems to be the recommended transition age. If, for whatever reason, cow's milk is not an option (some babies can't tolerate it), speak to your pediatrician about alternative options to find one that will provide your baby with the nutrition they need.