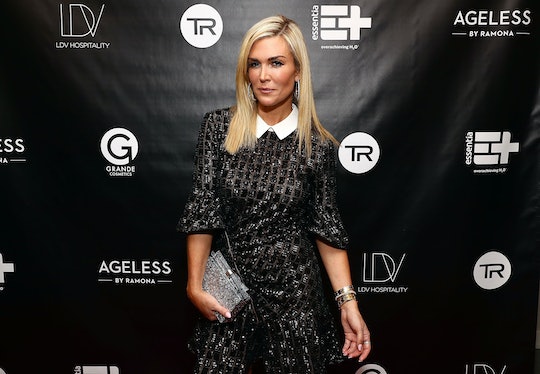 After a whirlwind romance facilitated by Carole Radziwill, Real Housewives of New York fans were sad to learn that Tinsley Mortimer, currently in her sophomore season, had broken up with her boyfriend Scott Kluth. But with Page Six reporting that the couple recently reconciled, some fans may be wondering: when do Tinsley Mortimer and Scott Kluth get back together on RHONY? The report did say that they rekindled their romance while Tinsley was filming, so it's possible we'll get to see them back together on screen. If not, and if they can stick it out through late summer, we may get to hear more about their relationship when the reunion show airs, typically sometime in late August.

Tinsley's entire relationship with Scott, who works in Chicago as the founder of website CouponCabin, unfolded on camera during Season 9, when Carole first set the pair up. She volunteered to make a double date out of it by attending with Adam, and even though Tinsley suffered some stumbles from nervous-drinking, she and Scott wound up kissing on their very first date. Sparks flew right away and they carried on a successful long-distance relationship (traveling often with Carole and Adam for vacations) for awhile. Tinsley even started working for Scott's site as an account manager, which gave her an excuse to visit the Chicago offices more often and allowed them to spend more time together.

By October, when Season 10 began filming, they had broken up and Tinsley admitted on the season premiere that, between the distance and how serious it got so quickly, the relationship was "a pressure cooker." They decided to split up but each of them were saying good things about each other to the press and expressing a desire to make it work down the road. Then in November, while she was visiting Scott over Thanksgiving, she told the Chicago Tribune, "We love each other and we’re hoping we can work it out. It’s a day-by-day thing. This just happened. I just left Chicago (Sunday) and I’m hoping we are going to be OK."

And as of last week, they appear to have, indeed, worked it out. According to the source who spoke to Page Six, "They got back together while Tinsley was filming. The distance was tough on them...He surprised her in New York several months ago and they picked up right where they left off."

Scott and Tinsley apparently moved into a $30,000-a-month duplex penthouse at the Marmara Park Avenue hotel together (so she can keep her full-time room service). We know RHONY shot at least through February, when reports of the "Real Housewives cruise from hell" broke. Bravo hasn't shown the event in sneak peeks yet, but the disaster was heavily reported with many Housewives themselves commenting. According to Entertainment Tonight, while on a yachting excursion in Colombia, the Housewives caught a nasty stomach bug, the waters were rough, which exacerbated everyone sea sickness, and the ship's engine caught on fire while the boat started taking on water with only a few lifejackets to go around the whole cast and crew. Thankfully, a rescue boat brought everyone to safety, but the women were reportedly so distraught that the network offered them counseling. (Sidebar: how many times will Bethenny have a near-death-at-sea reality TV experience?!)

So we'll have to wait and see if Bravo kept shooting for a couple months following the incident to catch Scott and Tinsley's romantic reunion. If not, then we can definitely count on hearing an update at the reunion show.