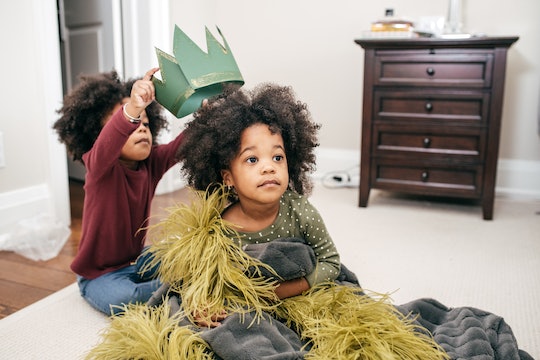 Here's When Your Toddler Will Really Get Into Pretend Play, According To Experts

Playing peek-a-boo and stacking blocks are great and all, but when you're parenting a baby, you might find yourself wishing for playtime that is just a bit more...lively. If you're ready to engage in more interactive play with your kiddo, you'll be happy to know that children really start playing pretend earlier than you think.

"Starting around their first birthdays, many children will imitate simple actions with objects that seem to have at least a slight 'pretend' aspect, such as holding a cellphone up to their ear and pretending to talk," Dr. Michael Mintz, clinical psychologist at Children’s National Hospital tells Romper. "By 18 months, many children are starting to perform simple pretend play, often by caring for baby dolls or stuffed animals as their parents care for them — and younger babies — by pretending to feed them with a bottle, spoon-feed them, or rock them to sleep."

Mintz explains that as children approach age 2, their pretend play shifts and becomes more complex. "Many of these play routines are rooted in imitation, at least at first," he says. "But, as children start to develop more complex language, their ability to imagine alternatives to what is right in front of them also develops. Indeed, language and pretend play tend to develop along similar lines."

But, what about the more creative element of pretend play? From buzzing around acting like bumble bees on the hunt for pollen to collect to intergalactic space explorers solving untold mysteries of the solar system, my kids can come up with some extravagant imaginative play scenarios. I'm not exactly sure when they first began to take quantum leaps into outer space or practice pretend pollination, but I do know that at ages 6 and 7 now, they've been playing make believe for at least half their short little lives, and probably longer.

"This is the classic type of play in the toddler to preschool years when children might act as their favorite pretend or fantastical characters," Dr. Jack Maypole, pediatrician, tells Romper. "Their play may be a solitary endeavor, with the young hunter walking the woods alone, or they may play with family members or friends to create plots and characters that can last for minutes or years."

While it is definitely joyous to watch your little one begin to exercise their flourishing imagination in a tangible way, experts say that above and beyond being fun for kids, pretend play is a crucial part of your child's development.

"Play is what children do. It is an essential part of learning," Lee Scott, early childhood education expert, tells Romper. "As children play, they learn to collaborate, communicate, test out ideas, build vocabulary, create, solve problems, and do much more."

"Pretend or Dramatic play is when children act out what they see in the real world and in their imaginations," Scott tells Romper. "Children use dramatic play to develop social-emotional skills and to apply what they have learned. Dramatic play is also important for language development as children learn to express themselves."

I remember vividly the early toddlerhood days when my oldest son started mimicking the "choo choo" sounds I would make as we played with toy trains. He was also fond of sipping imaginary coffee out of toy teacups and saying "mmmm" as he copied my daily morning routine. Experts agree that parents can help encourage creativity by actively participating in pretend play with kids in this way, but taking a step back and letting kids lead the way as they become more independently creative is the way to go.

"I try to encourage parents to be passive participants when they play with their toddlers," Mintz says. "Instead of dictating what type of play you and your toddler will engage in, try to follow your toddler’s lead and expand on their simple pretend play. Try to avoid asking questions (which tend to direct toddlers or distract them from their plan) and see where their play takes them."

Lee Scott, Chairwoman of the Educational Advisory Board at The Goddard School

Dr. Jack Maypole, pediatrician and member of the Educational Advisory Board at The Goddard School

More Like This
26 Toddler Lunch Ideas They’ll Actually Be Excited To Eat
17 Best Potty Training Products For Toddlers
34 Instagram Captions Perfect For Preschool Graduation Photos
Should You Be Giving Your Toddler Melatonin To Help Them Sleep?