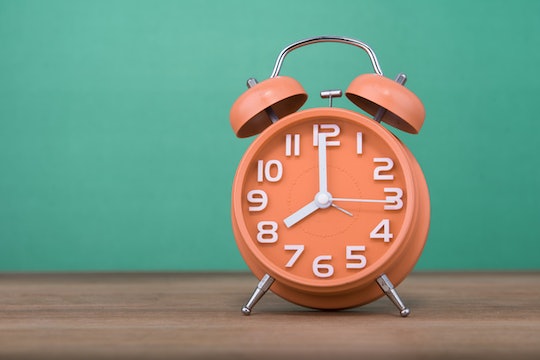 If You're Counting Down The Days When Clocks Change Back, Don't Hold Your Breath

Really, there's still well over a month left. The time changes on Sunday, November 4, when clocks turn backward one hour, according to Time And Date. What does this mean for your daily routine? Sunset will come about an hour earlier than the previous day, but mornings will have more light. This is great news if you're someone who enjoys rising with the dawn, but plenty of people won't get done with work or school until the sun sets. That part of DST ending can be dispiriting.

And really, both the beginning and end of DST can have a real effect on your body and mood. First, it seriously messes with your sleep schedule. In fact, only a minority of people actually experience a full extra hour of sleep when DST ends, as noted by Harvard Health Publishing. It's more common to wake up too early or have problems falling asleep, as further explained by Harvard Health Publishing. This makes sense to me on a personal level, because everyone I know is a groggy mess for a few days after DST ends in the fall. The time change is rough, no matter which direction it goes.

Plus, new research suggests that the human body never fully adjusts to these time changes. "If we didn't change to daylight saving time, people would adjust to dawn during the summer and again to dawn in the autumn. But this natural adjustment is interrupted by daylight saving time," said lead researcher Till Roenneberg of Ludwig-Maximilians-University in ABC News. In fact, his research shows that the human circadian clock just doesn't adjust to DST, as noted in Current Biology. What this means exactly remains to be seen, but it's possible that many people feel a bit "off" because of this phenomenon. At least, that's definitely my go-to excuse now.

Health and wellness effects aside, the end of Daylight Saving Time is a reality for a huge section of people. In the US, only Arizona, Hawaii, and some US territories such as Puerto Rico don't observe Daylight Saving Time, as noted in TIME. For everybody else, these twice-yearly changes to the clock are just a part of life. Of course, you don't have to just accept it. For the true DST haters, there's even a petition to End Daylight Saving Time on Petition2Congress. You can take action against what the petition calls the "unnecessary flip flopping of time."

So unless you decide to move to an area that doesn't observe it, or really push that petition through, Daylight Saving Time is one of those quirks of modern life. Just pretend you'll get an extra hour of sleep this November, and consider getting a light box if the lack of sunshine gets too annoying.

More Like This
The Best Halloween Family Pajamas To Match Your Boos
10 Halloween Games Kids Will Love
Endometriosis & Your Sex Life
What Is RSV?