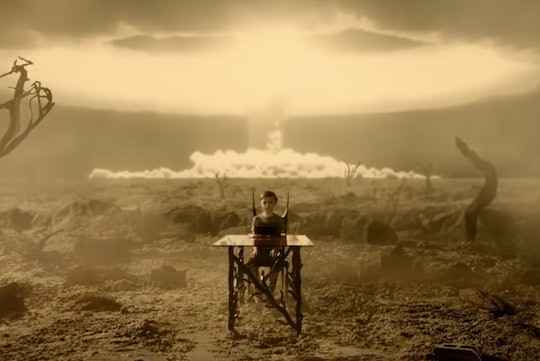 'American Horror Story: Apocalypse' Will Premiere Sooner Than You Think

Fall is right around the corner, which means American Horror Story fans are biting their nails to the bit waiting for the new season. Although details about season 8 of FX's cult horror series have been known for months, a release date had yet to be confirmed — until recently. So when does American Horror Story: Apocalypse premiere? The good news is, fans won't have to wait long for the end of the world.

The eighth season of American Horror Story will start on Wednesday, Sept. 12 at 10 p.m. Eastern, according to Us Weekly. That means that, in just a few short weeks, every AHS diehard will be hunkered down on their couches, with their televisions turned to FX, watching the premiere of the highly anticipated crossover event.

AHS: Apocalypse is expected to be one hell of a rollercoaster ride. That's because this installment will be a mix of two of AHS's most popular seasons: Murder House (season 1) and Coven (season 3), Harper's Bazaar reported. Actor Sarah Paulson will play three roles this season, including Cordelia from Coven.

"She is the Supreme for now. In the beginning of our story, that is the title she still holds,” Pauslon confirmed during a Television Critics' Association press tour, according to Us Weekly. “I don’t know how long that’s going to last.”

Apocalypse will also see the return of some of the most beloved characters in the AHS universe. Taissa Farmiga, Gabourey Sidibe, Lily Rabe, Frances Conroy, and Stevie Nicks will all appear in the new season, with Farmiga reprising her roles in AHS: Murder House and AHS: Coven, according to Entertainment Weekly.

And those aren't the only AHS stars to return to the series. Because season 8 of American Horror Story is a crossover of Murder House and Coven, you can expect to see Murder House alums Connie Britton and Dylan McDermott pick up where they left off, Entertainment Weekly reported. Evan Peters, who's had a part in every AHS installment, will also appear in Apocalypse, this time as a hairdresser who is a descendent of iconic actor Joan Collins, who will join the cast, according to Us Weekly.

But the return of AHS favorites isn't the most exciting part of Apocalypse. In the new season, the incomparable Jessica Lange will reprise her Murder House character, Constance Langdon, in episode six, which will be the first time Lange has appeared in AHS since season 4, Freak Show, Harper's Bazaar reported. The episode will be directed by Paulson, who will also bring back her Murder House character, Billie Dean Howard, this season.

It only makes sense for Lange's character to return to the AHS universe for season 8. After all, one of the plot lines of AHS: Apocalypse will focus on her adopted son, Michael Langdon, according to Us Weekly.

Michael, American Horror Story fans will remember, is the child of Britton's character, Vivien Harmon, had with demon Tate, played by Peters, after he raped her. After the enter Harmon family died, Langdon adopted Michael, who will be played by actor Cody Fern in Apocalypse. And the murderous Michael, you guessed it, will be the antichrist.

But how this season fits into the broader AHS world has yet to be confirmed.

Last year, American Horror Story creator Ryan Murphy revealed in an Instagram post that each season of the series is based on Dante's nine circles of hell. Lust and Violence are the only circles left (FX renewed AHS through 2019), so Apocalypse could either be one or the other, or a mix of the two. But because season 8 is set in a post-apocalyptic world, I am going to hazard a guess that Violence may be the winner.

Then again, are there really any winners after the apocalypse?