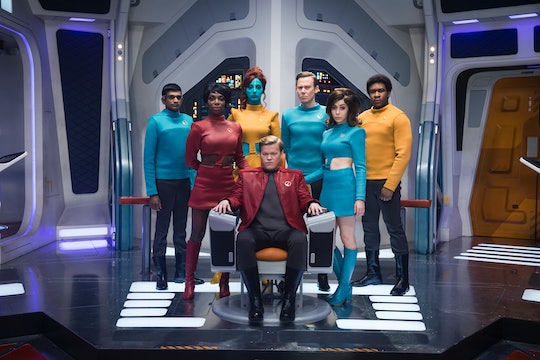 When Black Mirror came to Netflix a few years ago, most fans, including myself, ate up each episode and then did it again and again, and once more in preparation for the fourth season. But since the seasons are typically short and always seem to leave you wanting more, you almost have to already be asking: when does Black Mirror Season 5 premiere?

Apparently, there will be talk of where the show’s future will go once Season 4 has officially premiered, but I don’t see bad reviews or a lack of viewership being part of the technology anthology’s downfall. Creator and writer Charlie Broker told Express.co.uk that once the season is released, there could be a bigger announcement about Black Mirror’s future.

"There’ll be a discussion at the end," he said cryptically. The finale episode of Season 4 is "Black Museum," which is said to pay homage to nearly all of the episodes that have come before it, prompting some fans to worry that it’s going to act as a series finale as well. But at least for right now, Broker hasn't confirmed that very scary theory. He added: "We always used to say it’s a shared universe but then I started to say it’s a psychologically shared universe and now some of the episodes are definitely connected because there’s specific references within that story to things we’ve seen in other episodes. So it sort of is now."

In an interview with The Hollywood Reporter, Broker didn't outright deny that there will be a Season 5 either, but he also did not confirm or give a potential premiere date for a fifth installment. He did say that keeping the episode number at six would probably stay the same, so that's at least some sort of progress.

Black Mirror originally premiered on British television in 2011 and was acquired by Netflix in 2015. The much-loved series is comprised of 19 episodes total, including those of Season 4, each acting as a standalone story and commentary on either a near future world or an alternate present day society where technology is examined at the forefront. Broker told Vice.com that his views on how technology plays a role in everyday life isn’t meant to attack the industry as a whole, but rather to bring his own fears to the screen. "I'm generally not anti-technology — I just worry about everything," he said in the interview. "I could worry about this tea scolding me, or gouging my eye out with this spoon."

But you’d think that since technology seems to be getting only more advanced and social media isn’t going anywhere, that there will never be a shortage of material to feed Broker’s fears as well as the plot for different Black Mirror episodes. That being said, with the multiple Emmy nominations Black Mirror has received recently, it would be smart for Netflix to keep the series around. And, according to an interview with Entertainment Weekly, there’s a good chance of getting at least another season, though Broker couldn’t officially comment on the eventual premiere of Black Mirror Season 5.

In the past, the time between Black Mirror seasons has varied. While the series itself premiered in 2011, Season 2 didn't come until 2013. But then, after the much-loved 2014 "White Christmas" special episode starring Jon Hamm, Season 3 arrived in 2016, so really, fans are lucky to get a Season 4 premiere date at the tail end of 2017. But this could mean that, without a formal announcement or confirmation yet of a fifth season, Season 5 of Black Mirror may not debut for a while.

Given that it took some time for Season 4 to premiere on Netflix, however worth the wait it may have been, Black Mirror Season 5 would probably pop up around this time in 2019, especially if the episodes prove to be as lengthy and intricate as Season 4 promises them to be. But since there’s really no bad episode of Black Mirror to date, I suspect that fans will have no problem waiting pretty much any amount of time if it means they’ll get a fifth season regardless.